Looting in Progress at the White House? 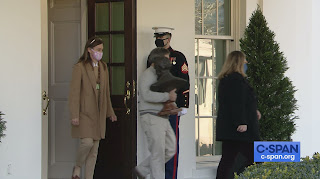 I have no evidence that they are, in fact, stealing the property of the American people at the White House. This is really something that is probably being looked at by the people who run things at the facility. There are clear rules for what is, and what is not, the property of the Trump family and what belongs to the government.

All of the furnishings in the White House go back into a sort of warehouse or pool of available items and then the new president chooses what he wants to have on display. It's more of a museum situation where much of the permanent collection is in storage and only a limited number of items are put out for exhibition. There are customary items that are displayed in the Oval Office but who knows what Biden will decide to put in there.

I think the yellow rug has to go. I don't care about the "Resolute" desk. The president actually works in an office nearby and the Oval is used more for ceremonies. But, again, that's up to whoever is president. Trump probably did more to defile and disgrace the place than anyone else. I would not want to occupy it so soon after his departure.

In any event, the Trump family did bring their things and they did receive gifts. They appropriated items from the French Embassy and who knows what else? They have small, light fingers, in other words. The thing is, I do suspect that the lines are blurred because the Trump family has behaved as if everything in the White House belongs to them.

Everything you see could very well be innocent, but it's a bad look to be seen packing up when you never even congratulated the person who won.

Email ThisBlogThis!Share to TwitterShare to FacebookShare to Pinterest
Labels: Editorial

Pennsylvania State Legislator Doug Mastriano May Be in Serious Trouble 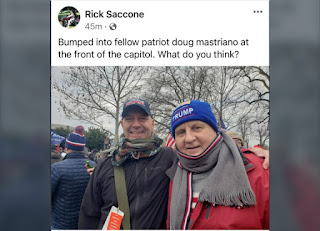 Oh shit, they have the receipts from your almost successful attempt at staging a coup that would have assassinated at least three members of the presidential line of succession:

Campaign finance records show that State Sen. Doug Mastriano’s campaign spent thousands of dollars on charter buses ahead of the Washington D.C. rally that ended with supporters of President Donald Trump violently storming the halls of Congress last week during an insurrection.

Mastriano (R-Franklin), rumored to be a future GOP gubernatorial candidate, has faced calls to resign for attending the rally. A review of the state senator’s campaign finance records shows that his committee paid $3,354 to Wolf’s Bus Lines in three installments for “bus reservations” about six days before Trump’s “Save America” rally.
The same week the payments were made, Mastriano posted an event on Facebook offering bus rides to D.C. on Jan. 6 — charging attendees $25 dollars for an adult and $10 for children.
Mastriano refused multiple requests for comment. Senate President Pro Tempore Jake Corman says Mastriano was within his First Amendment rights and declined to pursue punishment.

Insurrection is a messy business.

First you have to find a vendor who has buses. Then you have to haggle over what kinds of buses will work. You don't want to use the expensive ones--your goober supporters who smear urine and feces everywhere on a regular basis could cost you a damage deposit.

Second, you have to herd them into lines and ship them across state lines without anyone violating their parole or probation. What a hassle! Then, when your attempt to carry out insurrection fails, you have to gather up all of those hangdog faced losers and ship them back to wherever you got them and that's when they typically go to town on the upholstery of the cheapest bus you can find.

Third, you have to tell a number of emotionally unstable adults that bringing their weapons on the bus is one thing but showing up the morning of the bus trip to a site of insurrection against the government of the United States with their emotional support animals is just unacceptable. Oh, no, another $500 for the damage deposit? Because a sick potbellied pig named Rushy Rushy Piggy Boi just shit all over the back of the luxury coach? Well, that's great! Fine! Whatever!

Fourth, you have to be careful no one finds out and whoops too late, bro.

Pennsylvania does not have a functioning legislature right now, but that's okay. The FBI has a plan for this sort of thing.