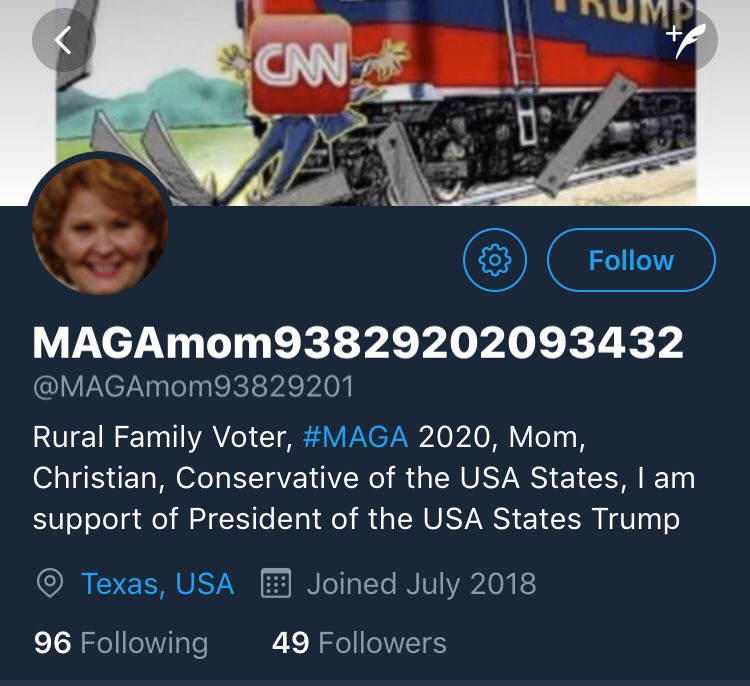 Today's word salad is brought to you by Russia, Incorporated.

There's an attack on our democracy underway, and while this worthless account has already been suspended, there are millions more just like it, waiting to be born in the fevered imagination of someone who can't quite grasp Engrish.

Social media platforms and the Federal government are woefully unprepared for the 2018 mid-terms, and this is not by accident. They don't care if Russia hacks the election. Republicans will win if they do.

It's as simple as that.

This is George Tierney, and he lives in Greenville, South Carolina.

Apparently, he does not believe in using a polite and insistent tone on Twitter. He prefers to curse at women and act like a buffoon in public. According to one of the greatest bloggers ever, a one Mr. Tbogg, he is upset that people are taking screenshots of his vile, intemperate Tweets and he believes that there is a legal remedy for said actions.

There is no legal remedy. When he hits the button and sends his Tweet into the world, along with it goes proof that he has no clue whatsoever how to conduct himself in public.

I'll bet you didn't think I was going to go there. I'm going there:

Oh, and after the jump, I have a slew of George Tierney tweets archived for future reference about George Tierney, including calling Kirstie Alley "fuckchop" and having a bit of a moment engaging The Christina Kim in a very vocal discussion. And, if you can stomach it, towards the end George Tierney engages both Oprah and President Obama in a discussion on Twitter as well (I do not think they responded to George Tierney). 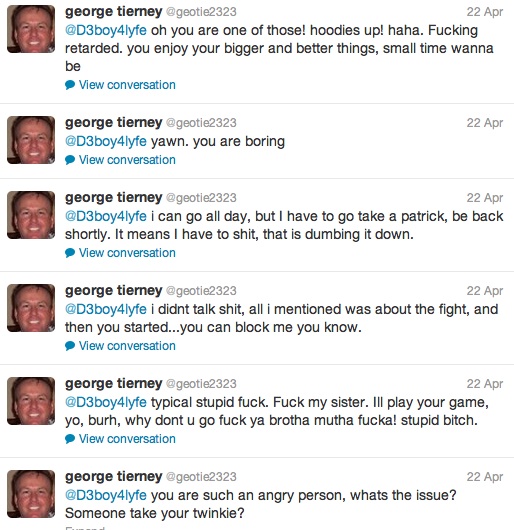 Christina Kim is, apparently, not one of George's favorite peeps: 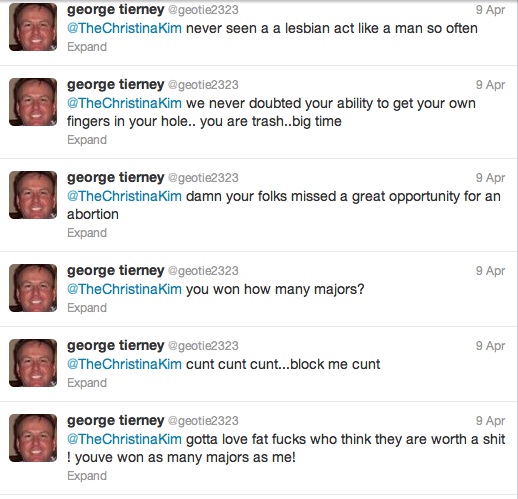 Now, why would a man say such things? Could it be drugs or alcohol? I think it could very well be. Either that, or Tourette Syndrome.

A lovely commenter pointed out that Mr. Tierney is not attacking Miss Kirstie Alley by calling her a "fuckchop." He is simply Tweeting the word "fuckchop" to her account because she asked people for terms and things of that nature. However, when is it ever okay to Tweet "fuckchop" at someone, regardless of their celebrity? 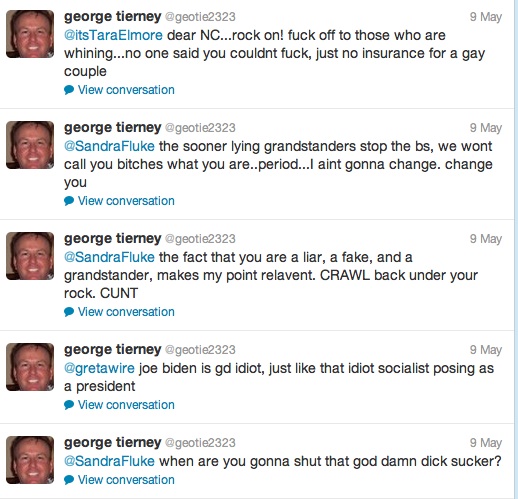 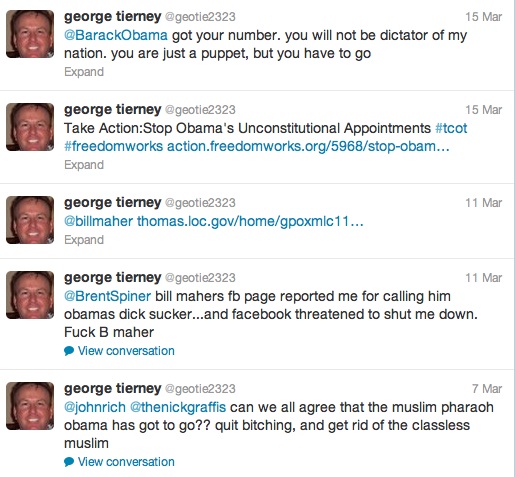 I have to say, Tweeting awful things at Brent Spiner is difficult to understand. First, I'm sure Brent cares. Second, I'm not sure what control he has over Facebook. Perhaps someone knows whether or not Brent Spiner is running the moderation department at Facebook? Anyone? And, third, when you have a personal problem, Brent Spiner is probably just going to sympathize with you, offer some great advice, and go about his business. 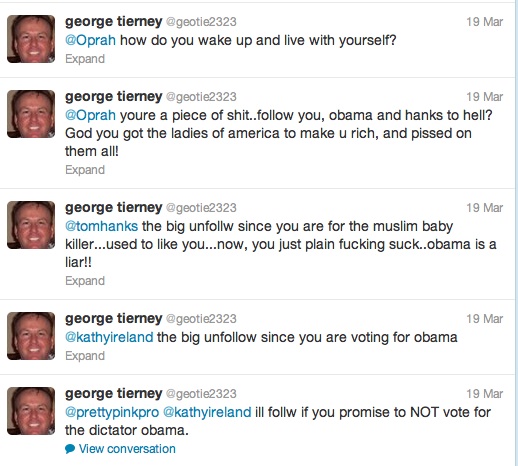 If you guessed that Mr. Tierney likes to Tweet after getting blotto, you might be guessing in a way that some would say is accurate.
These posts follow a pattern that is not entirely inconsistent with having a bender and waking up face down, bareassed naked, on a burning sports car outside of church.
on May 21, 2012 No comments:

Someone Help This Poor Man From the Stage 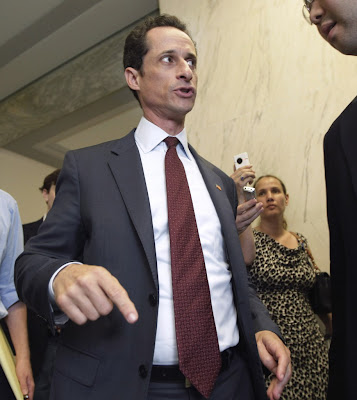 I have not really avoided this topic, but I can't help but make a comment about this now:

Rep. Anthony Weiner is asking for a temporary leave of absence from the House of Representatives while he seeks professional treatment in the wake of his Twitter scandal.

A spokeswoman for the Democrat said he has left for professional treatment and will focus on "becoming a better husband and healthier person."

Spokeswoman Risa Heller said Weiner wanted the leave of absence so he could be evaluated and work out a course of treatment. The statement did not say what Weiner would be treated for.

"It is with great disappointment that I call on Representative Anthony Weiner to resign,” Wasserman Schultz wrote. “The behavior he has exhibited is indefensible and Representative Weiner’s continued service in Congress is untenable.”

They have treatment centers that can help you when you're acting childish and immature?

I realize that there is such a thing as sex addiction, but I don't believe that's the case here. Representative Weiner behaved in a childish and immature manner, and while there are elements of self-destructive behavior involved, and moral issues as well, at the heart of this case is the behavior of this man. It was not illegal for him to blast out sexy messages, but it was rather rash and stupid of him to think that, as a man serving in a position of public trust that he could get away with doing this.

The real reason why Representative Weiner needs to resign is because he has demonstrated that he has rather poor judgement. His actions left him open to being blackmailed. That's the reasonable threshold that has to be met before someone should resign from an institution like Congress. And, that threshold should apply evenly to members of all parties. There are plenty of members of Congress who should have resigned long ago but didn't. Shame on them for not doing so.

This man needs to go. His career in public service is now pretty much over. That's really all there is to it. When you're done, you're done. It may not be fair, but it's the political reality that exists right now. The sooner he goes, the quicker he'll be forgotten, and maybe that speaks to the real reason why he wants to hold on. This is a man that cannot come to terms with the fact that his own behavioral choices were so self-destructive that they destroyed him long before the revelations came out.

Here's a man who was engaging in just about the stupidest thing imaginable--using his own name and likeness to connect with women over a social media platform for the purposes of sexual gratification. And he still clings to the idea that he has some sort of political viability? Please. He's done.