The Walking Dead is Ruining America 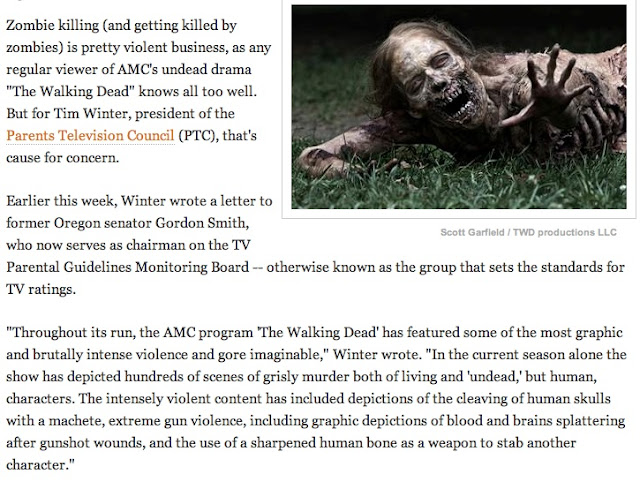 I don't want to go overboard and suggest that Tim Winter of the Parents Television Council is somehow not a bright or intelligent person, but I'd really like to know how one depicts scenes of "grisly murder both of the living and 'undead'" when, in point of fact, the dead are just plain dead.

We have a lot of problems in this country, but a gory television show ain't one of them.
on December 14, 2012 No comments:

Congratulations on Ruining Another Show, NBC 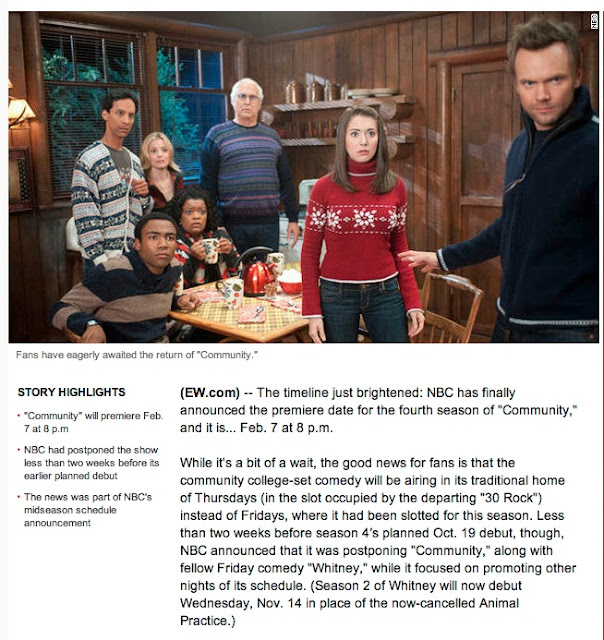 As much as I like Community, I'm just not waiting around for it. I may check it out at some point, but, I suspect that for a lot of people, the show ended when Dan Harmon was fired.

This is the new business of television. Do you like that show? You'd better be ready to have it torn to pieces before your eyes. Do you have strong, loyal feelings for the creative output of others? Too bad. In order to wring a few extra pennies from it, the powers that be will do whatever possible to ruin that show you believe in so as to make absolutely certain that someone who never watches television will continue to ignore what you like.

In a few years, will there even be any shows? Why would anyone watch what they're putting on the remaining television networks anyway? The real television is being made on pay cable.
on November 01, 2012 No comments:

They Were Never Going to Cancel Community 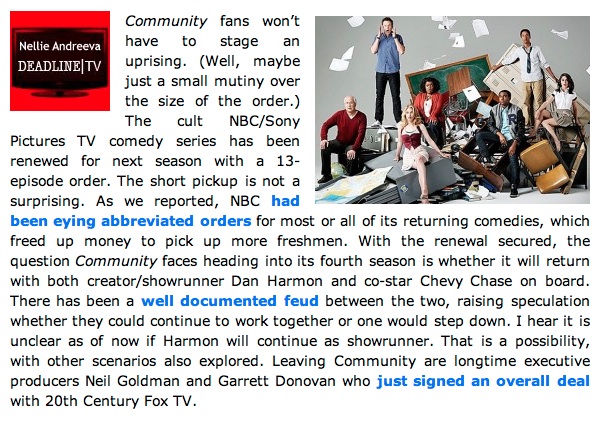 I never thought they were actually going to cancel Community. NBC is so desperate for shows right now that it just did not make any sense to take a show with a solid following and cancel it, but that's pretty much the story of any show anyone ever really cared about. I did think that NBC was going to ruin the show through their incredible mismanagement.

Chevy Chase is clearly not suited to work anymore. He has, literally, become one of the most ridiculous, washed-up former has-beens to ever grace the screen. He should be glad they let him on the lot to tape the show.
on May 11, 2012 No comments:

Is it really as bad as this? 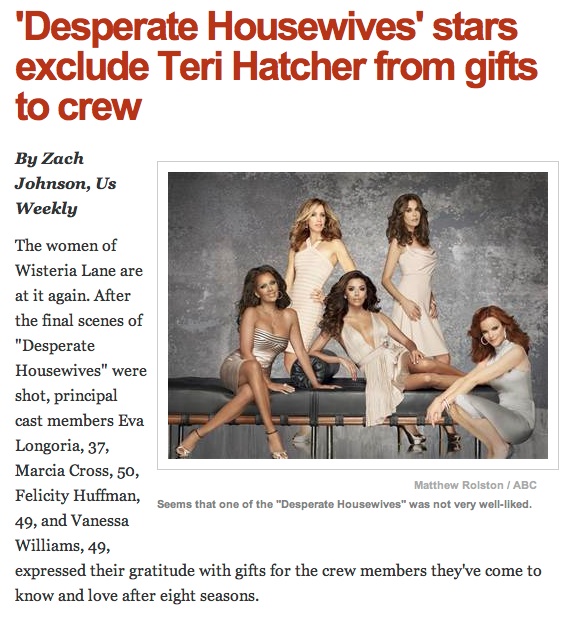 It all sounds so catty and backhanded. Wait, what's the show about?
Teri Hatcher's gift to the crew is showing up for work. Ignore the haters.
on May 09, 2012 No comments:

Pixar Has Some Tough Marketing Choices Ahead 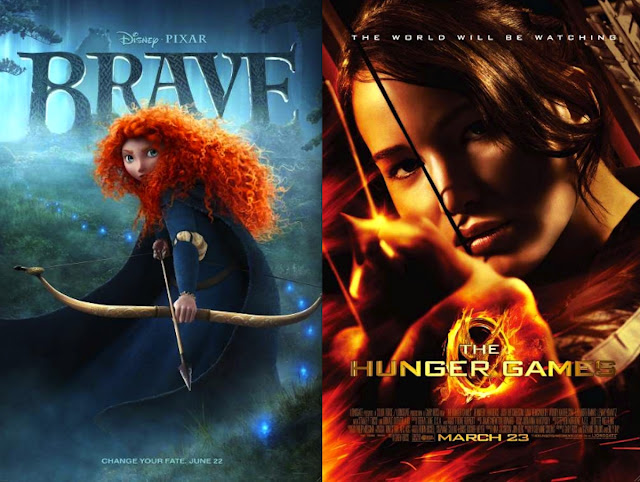 The similarity here is noticeable. Pixar needs Brave to be a hit and, to be fair, they marketed the fact that the lead character uses a bow and arrow last year when the original trailer came out. Still, there is no escaping the fact that The Hunger Games is the biggest thing on the planet right now. That is, until we see how The Dark Knight Rises and the Avengers perform.

It is worth noting that I believe we will see more of this "heroine with a bow and arrow" thing crop up.

Celebrities abandon social media outlets all the time. This is not news. But, when I was checking statistics on the top Google+ users, I saw that Erin Andrews was very highly rated and had numerous followers (number one on Google+ is Britney Spears).

The problem is, Andrews hasn't updated her Google+ account since before Christmas, but that hasn't stopped the comments on her last post. 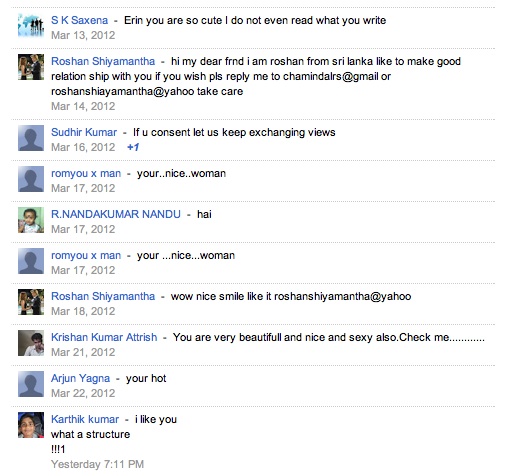 Some of those are pretty funny, but I think that if you are going to abandon social media, at least delete your account. There's nothing wrong with that.

Running on Whippits and Red Bull

In case you haven't been inundated with this already, Demi Moore ended up having a bad week. And, it just sort of hit me when I was trying to ignore this story and not blog about it. We have been treated to an alternative version of Demi Moore for the last decade or so that has been a complete and utter fraud.

It was all based on her being addicted to Red Bull.

There are stories coming out now that she has been living off of Red Bull for ten years. How is that possible? How is it possible that she was able to do that? (Then there's the girl who lived on chicken nuggets--how awful if, in fact, it's even true).

In her attempt to maintain a career and a public image, Demi Moore has probably ruined her health. Was it worth it? Of course not.

Zooey Deschanel Turns Her Back on Gawker 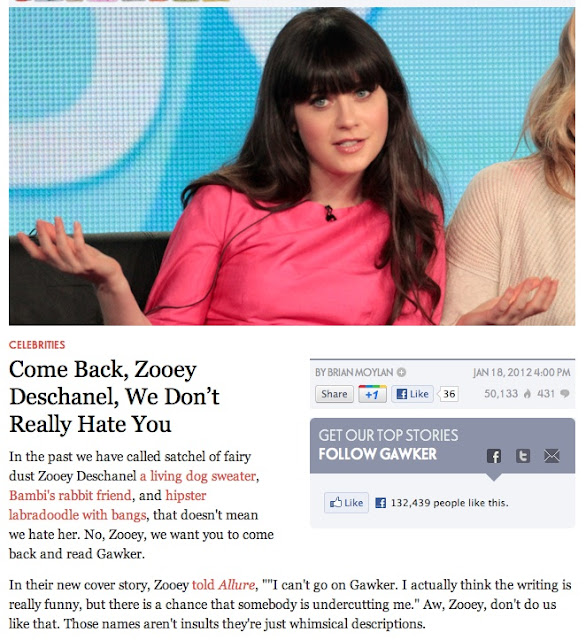 People get tired of being mocked. People also get tired of celebrities who complain about websites that mock them. The best thing to do is to stop worrying about which site does what and do whatever it is you do and get on with it.

Zooey Deschanel has been hitting the interview circuit pretty hard lately, and that's fine with me. This backlash against her indicates that something she's doing must be working. The only reason why anyone would call you a labradoodle is if you were making your mark.
on January 19, 2012 No comments: 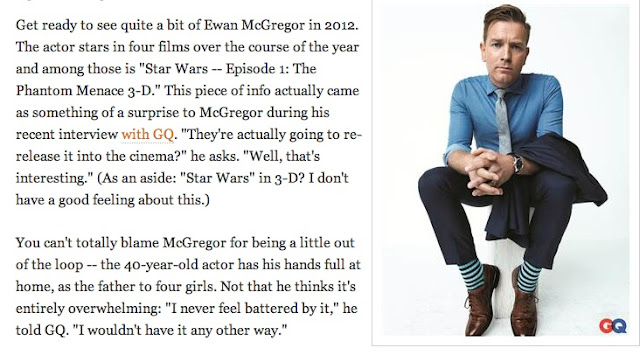 Somehow, I don't think it was on anyone's agenda to make sure that McGregor knew that they were going to go out and milk Star Wars for more cash. And that's all that the 3D thing is--a re-release to wring cash out of an entertainment-starved population.

Let me guess--lasers are going to shoot out at you when you're watching it? Brilliant.
on January 03, 2012 No comments:

The Gas Princess Falls From Grace 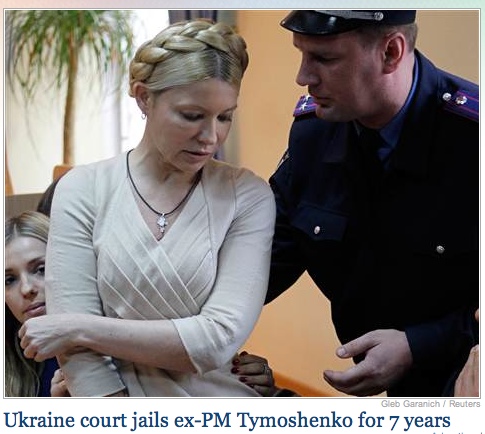 At one time, Yulia Tymoshenko was poised to rule Eastern Europe. A great Ukrainian bloc of countries could have emerged from the shadow of a declining Russia and taken up the banner of a great republic stretching all the way from Prague to the Caucasus. Millions could have abandoned their own failed states and followed her Ukraine into a glorious new era. Now, that's all dust and smashed bottles, abandonment and ruin.
This verdict was less about Tymoshenko and more about a decidedly anti-democratic, anti-Russian sentiment within the Ukraine that threatens the stability of the region. What a sad state of affairs.
Easily the most powerful of all the gas princesses of the post-Soviet era, Tymoshenko looks glammed down here, but she will rise again. Fanboys all over the world, rejoice. Prison will make her stronger.
on October 11, 2011 No comments:

Mathira Mohammed and the Future of Pakistan 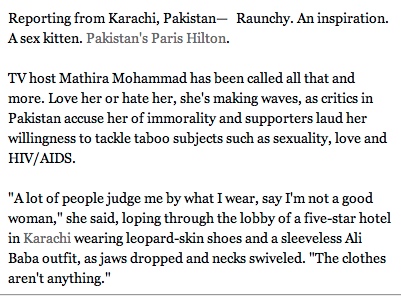 Mathira Mohammed might not be in a position to start a revolution in Pakistan, but she is capable of causing a sensation that begins the "maturation" of Pakistani society. There is a tremendous amount of pent-up sexual and social frustration in countries such as Pakistan, not all of which are caused by religion. Economics and family situations also have to be factored in.

For her to have tapped into the frustration and to have spoken so eloquently as to say this:

But her big break came when a male caller made lewd suggestions.

"That's sad," she fired back live, without a moment's hesitation. "Pakistan, you are so frustrated. Go to your wife.... If you don't have a wife, find a wife, or do something to get rid of this frustration. Live TV is not a place to release your frustration."

I can see why it sent shockwaves through Pakistan. Good luck to her.
on September 25, 2011 No comments: 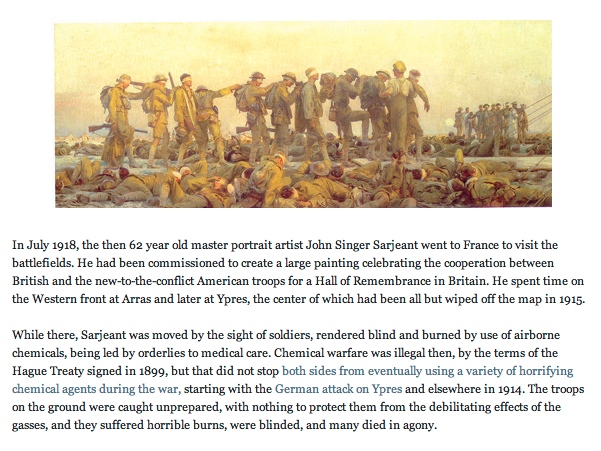 The use of 'Sarjeant' rather than 'Sargeant' appears to have been a bit of mystery here. The Wiki page, and even the .org website of the same name use Sargeant.

These images were very influential. To this day, soldiers are issued gas masks. Anyone who understands chemical warfare knows that they are almost useless over a prolonged period of time.
on September 22, 2011 No comments: 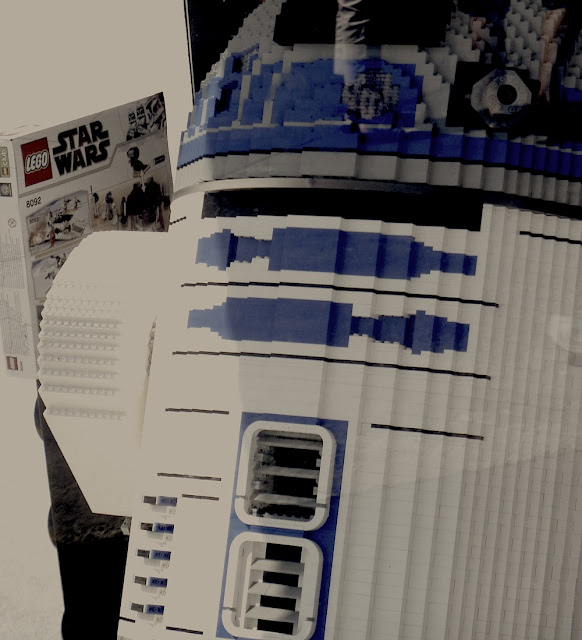 A very stylized photo that I cropped and messed with. Get your geek on.
on September 13, 2011 No comments:

It Must be the Shoes 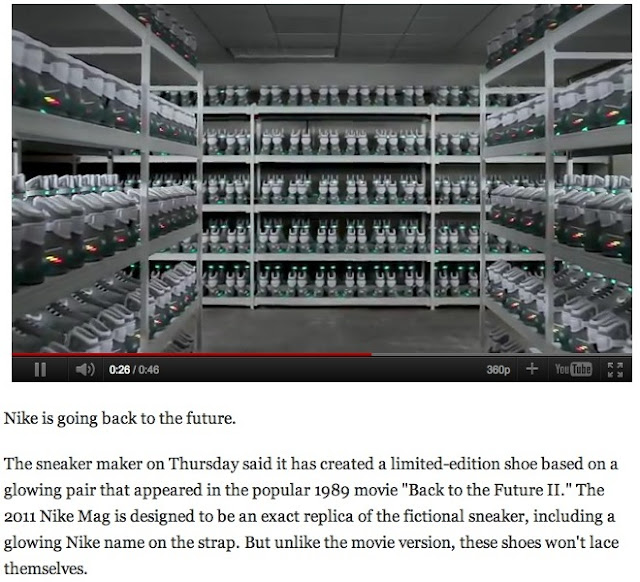 It's a nice piece of marketing, but the proceeds from the sale of these shoes actually goes to a good cause, so it's no where near as evil or exploitative as what Nike normally does.
on September 09, 2011 No comments:

It Must be the Shoes

It's a nice piece of marketing, but the proceeds from the sale of these shoes actually goes to a good cause, so it's no where near as evil or exploitative as what Nike normally does.
on September 09, 2011 No comments:

I didn't know if she was going to pull this one off. 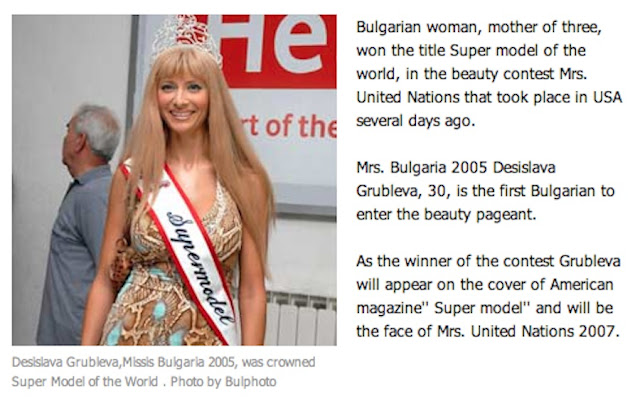 Her competition was enormous and her achievement is tremendous. There are a lot of people who blog and profess to be experts in obscure international beauty competitions for married women who are in their thirties. I am not one of them.
on September 04, 2011 No comments:

Since When Does Anyone Notice Something This Outdated? 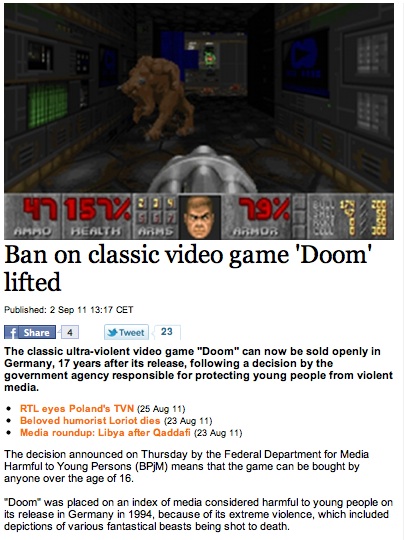 Yeah, it's a little late. I'm sure that there are ways to market a video game that is, essentially, unplayable on modern computers. But still.
on September 02, 2011 No comments:

Steve Jobs Resigns as the CEO of Apple

If this is true, then the ultimate geek is out of a job. Is he doing this in order to deal with his health issues or is this a strategic move to position himself and Apple for the next big thing to come? Is it for show or is it tragic? 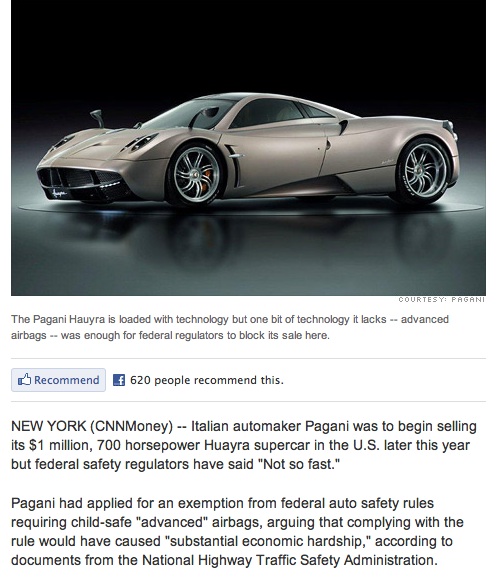 I would grant the Huayra an exemption from these rules, and call it a specialty vehicle. I would also make it so that anyone who bought one of these would be incapable of suing anyone over any kind of safety issue. You bought it, you break it, it's on you. The government has to do a better job of regulating normal car safety in normal vehicles. Spending any more than a half of a second on this nonsense is a waste of time and money.
on August 10, 2011 No comments: