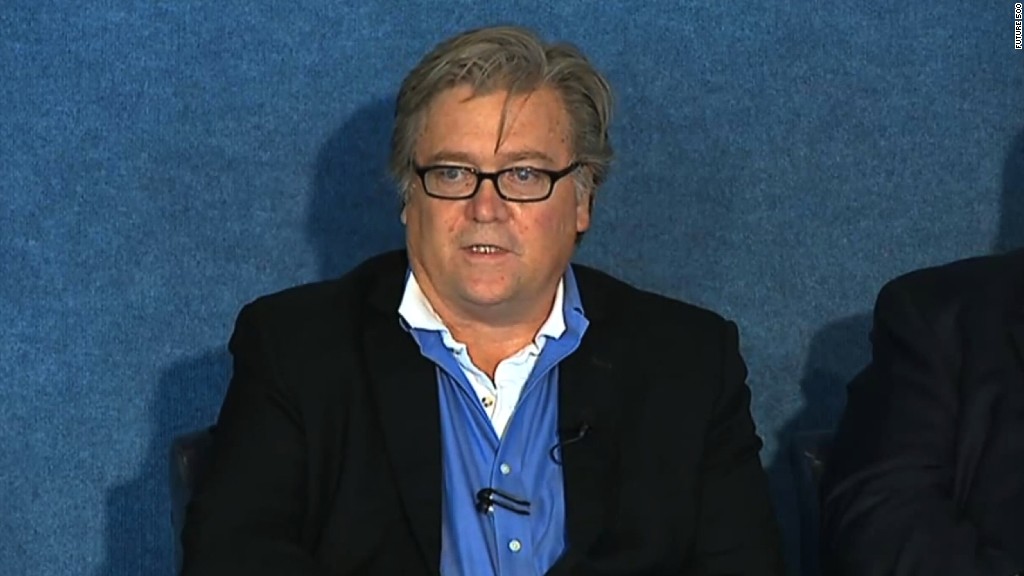 Once someone got a pot of coffee into Steve Bannon, he realized that there were seven or eight days missing from his memory. What the hell did he do? Why was he wearing hobo clothes? Why were strangers yelling at him from all sides?

President Trump’s former chief strategist offered a semi-apology Sunday after days of withering castigation from the White House over his scathing comments in a new book, praising Trump in a public statement that aimed to soften his earlier criticism.

Stephen K. Bannon’s mea culpa came as Trump and his senior aides continued a barrage of public insults against him. The president’s top policy adviser, Stephen Miller, on Sunday called Bannon an “angry, vindictive person” whose “grotesque comments are so out of touch with reality.”

In a written statement, Bannon asserted that passages in “Fire and Fury: Inside the Trump White House” by Michael Wolff in which he was quoted as being critical of Donald Trump Jr.’s contacts with a Russian lawyer — calling their meeting last year at Trump Tower “treasonous” and “unpatriotic” — were a mischaracterization.

Bannon insisted his criticism was aimed not at the president’s eldest son but rather at former Trump campaign chairman Paul Manafort, who was fired and is facing charges in special counsel Robert S. Mueller III’s Russia investigation. Manafort, who also attended the meeting along with Jared Kushner, Trump’s son-in-law, should have known “how the Russians operate,” Bannon said.

There is no evidence to suggest that Bannon's drinking got the better of him after going on a bender. I've checked, and no one has found him under a bridge with seven empty bottles of Mad Dog 50/50 and a Heath bar smeared behind his ear. These are all suppositions based on his hygiene and general appearance.

Expertise is Just Another Word For Bullshit 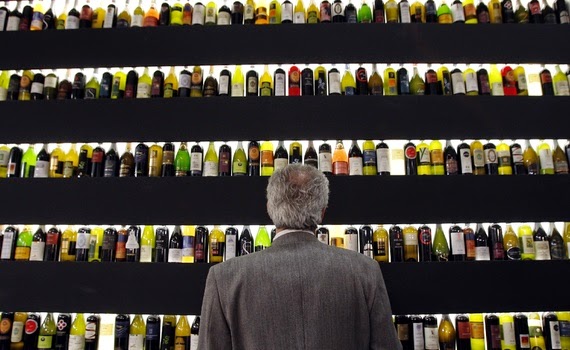 This confirms an old bias of mine:

Study after study has shown that people enjoy a wine more the more the pay for it. If someone believes a wine to be of high quality—if they view its producer as truly high-end—it ends up tasting better to them. “Marketers cannot assume,” the authors of one 2008 study in the Journal of Wine Economics wrote, “that intrinsic product attributes, even when experienced, will be weighted and interpreted accurately by consumers.” Since price is a strong predictor of enjoyment, one could make the argument that the wine industry is actually set up according to a certain logic: People pay more to buy the products they end up enjoying more.For most of the 20th century, California’s vineyards were viewed as inferior to Europe’s.

A drinker's preconceptions, as those wine economists noted, shape his or her experience. In a 2001 study that is so outrageous as to appear apocryphal, all 54 tasters—some of them professed experts—were fooled into thinking that a white wine was actually red. All it took to dupe them was a few drops of red food-coloring, which were used to make one of the two glasses of the same white wine take on a different tint. (That finding is not as dispiriting as one wine journal's 2009 paper that found that one in four subjects preferred dog food to some pâtés—but it’s close.)

In other words, the expertise of snooty people is revealed to be a game of bullshit. How this can be expanded to understand the mystique wrapped in the cloak of bullshit that's behind the Pono music player, vinyl records and vintage guitars is one for the scholars to work out.
I have always been skeptical of people who push things in your face because they are authorities and experts. Really? And how do you reconcile that with the fact that independent verification usually reveals expertise to be nonexistent?
Oh, and don't get me started on Baby Boomers, man.
on January 19, 2015 No comments:

Jim Irsay is Too Cheap to Hire a Driver 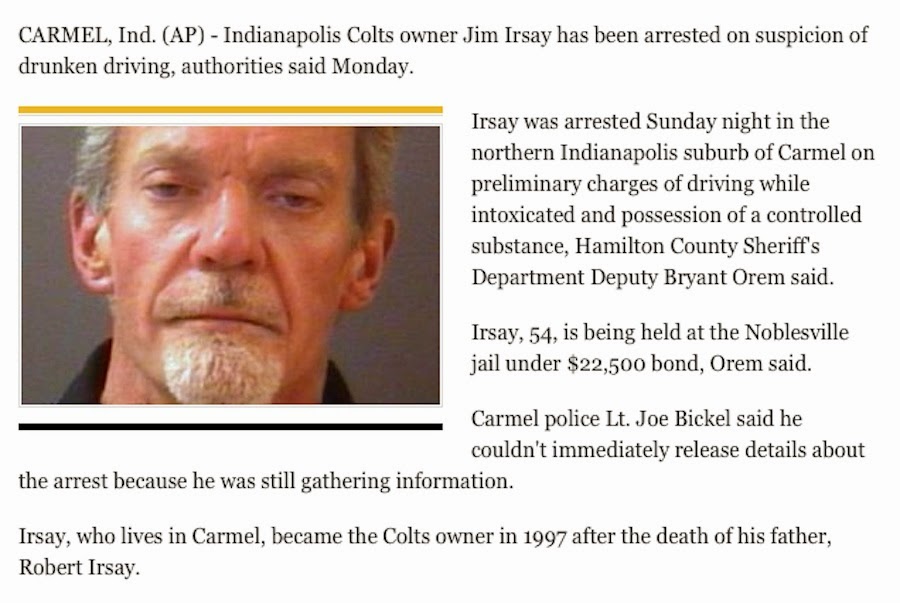 Somehow, some way, Jim Irsay became the poster boy for getting loaded on the cheap and being dumb enough to drive around in his home town.
on March 17, 2014 No comments:

The Useless Drunks of Mother Russia 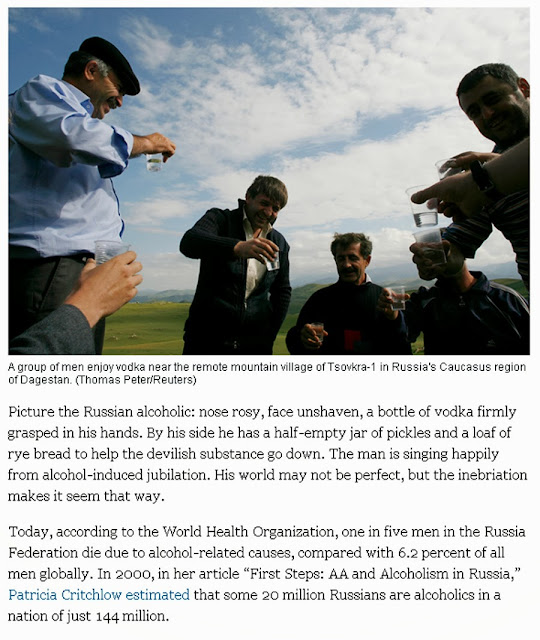 America has a lot of drunks, too. The difference is, our drunks get better welfare benefits. I would not know. I do not imbibe.

All of this fear of a resurgence of Russian hegemony is misplaced. We should fear a Russia teeming with stumblebums who set themselves on fire because they don't know how to work the stove when they are blind drunk.
on September 26, 2013 No comments:

Stupidity Has a Favorite Beverage

I couldn't make this up if I wanted to:

Many people who end their Friday or Saturday nights in a hospital emergency room have been drinking alcohol. In fact, public health experts estimate that about one-third of all injury-related ER visits involved alcohol consumption.

But what, exactly, are people drinking? What types of alcohol and even what brands? Is there a direct link between advertising and marketing and later injury?

Until now, those questions have been unanswerable, frustrating alcohol epidemiology researchers. But if results of a pilot study conducted by researchers from Johns Hopkins Bloomberg School of Public Health hold up, there may soon be a way to connect the dots.
When the Hopkins researchers surveyed ER patients who’d been drinking, they found that Budweiser was the number one brand consumed, followed Steel Reserve Malt Liquor, Colt 45 malt liquor, Bud Ice (another malt liquor), Bud Light, and a discount-priced vodka called Barton’s.

They say that 15% of the "Emergency Room" market consists of people who drink Budweiser. How that breaks down regionally is another guess. Budweiser's advertising campaign looks a little too highbrow to be the sole source of blame.
Alcohol and stupid things seem to always go together. You don't have to be drunk to set off a pipe bomb made out of things bought right there on the state line but it sure helps when you end up driving forty minutes to the nearest emergency room where they ain't all "judgmental" and whatever.
on August 16, 2013 No comments: