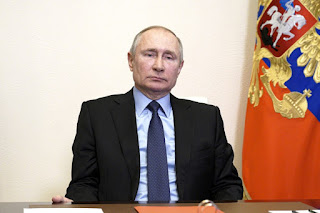 Vladimir Putin is responsible for an untold number of murders. He kills his own people. He kills people who aren't even Russian citizens. He kills because the West lets him get away with it.

ZAKARIA: President Biden was asked if he thought Vladimir Putin was a killer and he said yes. Was that too undiplomatic of him? There were people who criticized him saying well, look, you've got to deal with this guy and this is going to make any kind of cooperation more difficult?

CLINTON: I think he told the truth. And I think that if he had equivocated or dodged the question, that would have also had repercussions. You know, there are tens of thousands, probably millions and millions of Russians who know they're being badly governed, who want more, who want to be part of the, you know, broader modern world, who leave Russia if they can in order to live in the United States or Canada or Europe, you know, seeking not only freedom but opportunity.

And so for a United States president to have brushed aside what everyone knows to be true would have been demoralizing. Now he still has to deal with him. We know that. He talks to him on the phone. They may end up meeting. We did that through the Cold War. We did that with the Soviet Union. We did that with, you know, communists who had been part of Stalin's purges and murderous communist regimes.

Of course, we will have to keep talking. But that doesn't mean we should sugar coat the damage that Putin has done both to Russia and to countries and people outside. His killing machine run by, you know, the intelligence and military services of his country have killed across Europe, have killed as we know very clearly inside Russia.

And I just think that we've got to call it for what it is and give some -- you know, give some hope and support, even by long distance, to the many, many Russians who know they deserve better.

What should bother people about this exchange is not what Clinton says but rather the fact that more people don't take her analysis seriously. She's absolutely correct and providing support to the new Biden Administration. She's also adding tremendous value to the debate because of her skills and expertise.

No, the real tragedy here is that America had a chance to put her in charge of things and, instead, went with what we've had for the last four years. So many things need to be fixed and so much of what went on represents a huge hole in American foreign policy. There is no possibility of understating just how wrong things went in 2016.