A Presidency Based on Substance and Results 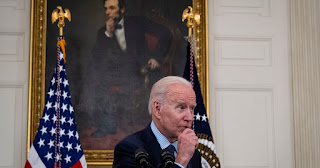 Once in a while, someone in the media is able to put our current political situation into words. This gets at the transformative and substantive changes that President Joe Biden is putting into place despite getting little notice or appreciation for his efforts:

President Joe Biden has been compared to Franklin D. Roosevelt and Lyndon B. Johnson and has even been called the "Anti-Reagan."

But there's another legendary political character that people should cite to explain why Biden's governing approach during his first 100 days in office is such a radical break from the past.

That character is a Black woman of indeterminate age who has 12 Social Security cards, mooches on benefits from four fake dead husbands and collects welfare payments under 80 bogus names while getting food stamps.

She is, of course, the infamous Welfare Queen.

That's how Ronald Reagan described her when he introduced the character during a presidential campaign rally nearly half a century ago. Reporters investigating Reagan's 1976 Welfare Queen story concluded that it wasn't quite true. Though never mentioning a name or race, Reagan had exaggerated the abuses of an actual Black woman in Chicago.

It didn't matter, though, if the story was more fiction than fact. The Welfare Queen embodied the GOP's belief that sending government aid to the poor would backfire because freeloaders -- hint, Black people -- will invariably splurge that money on steak and lobster.

The 2022 midterms are probably going to mirror the 2018 midterms in that there won't be as much engagement once Trump is not on the ticket. His supporters are fair-weather voters. His lack of actual enthusiasm among moderates and people in the middle of the road is damning. Where are those voters going to go?

I think Biden has entered office prepared to lose the House and Senate in 2022. He knows he can't even sniff at breaking the law because of the very real threat that an unhinged House in Republican hands would impeach him for anything he might do. There's no chance that the Senate would remove him, of course, but that's how he's been running things--with the expectation that he will have to be impeached five times just because of the death lock Trump seems to have on everything.

Opposition to Biden is without substance or merit. He is a winner who is rewarding his base. His presidency is already off to a massive string of successful accomplishments. The American people typically reward a winner. Why they haven't abandoned Trumpism completely speaks to a deviation from character that is temporary.

This all seems soft to me. If anything, once Biden proves he can get results and fix things, he's going to have more support from the American voter and will likely be rewarded with a friendlier House and Senate. I could be entirely wrong there but one thing is certain--American democracy has been saved by African-American women voters every time it has come down to the wire. I have no doubt that they will save it again in a year and a half.