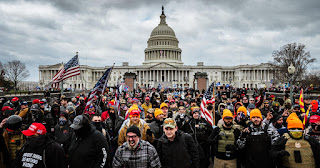 You can't expect a bunch of rich white racists to not flip on one another:

At least one of the Capitol riot defendants has flipped against the Proud Boys, agreeing to provide information that could allow the Justice Department to bring a more severe charge against the group's leadership, according to an attorney involved in the case.

The development is the first indication that people charged in the insurrection are cooperating against the pro-Trump extremist group. Federal prosecutors have made clear they are focused on building conspiracy cases against leadership of the Proud Boys and paramilitary groups like the Oath Keepers.

Court records have made murmurs for weeks about cooperators and plea deals in the works, and prosecutors revealed that a rioter wearing an Oath Keepers hat was in talks to cooperate earlier this week.

There are different ways to approach the identification and legal destruction of Trumpism. First, you have to figure out who these people are and what their organizations look like. I would much rather see the government get a handle on how many Proud Boys there are and what they are doing as far as their leadership and ties to right-wing business interests are. There is a lot of money flowing into these organizations because, let's face it, none of this is a labor of love for these people. The leaders are fairly well off but they're not about to use their own money. The low level scrubs that are being compelled to flip are poor and not as well connected. This is how the right wing rage machine exploits and consumes its own.

Second, you have to have airtight legal cases and strong prosecution. That takes time and resources. We might be concerned about future attacks and other endeavors from these groups. The government is likely surveilling them and looking for white knights - people who come to their aid or offer to help them restructure and defend themselves. That takes skill and deep pockets and anyone willing to risk their status in Trump world is probably already being watched.

Third, the goal is not to put Joe Blow from Dogshit, Kentucky in jail for 3.5 years. The goal is to take figures like Roger Stone and turn them all inside out and bankrupt them so that they have to plead for more funds. That, in turn, shakes the tree and more people are caught in an ever-widening investigation that is following all of that money through the financial system. I would think that the forensic analysts are having a field day, tracking how the financing for pro-Trump hate activity is being funded in this country.

It's a long game they're playing and it's fun to watch.