Relentless Bullshit From an Incompetent Bunch of Idiots 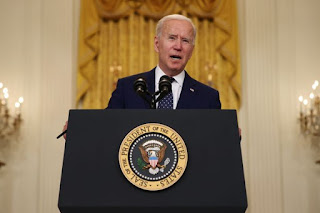 The absolute worst coverage of the Biden Presidency is actually coming from Politico these days. To be fair, most of the coverage is of low quality and ignores Republican obstructionism, lawlessness, and conveniently forgets the abject cruelty and incompetence of the last president.
Case in point: 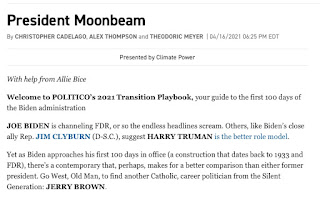 Here, a roundup of reactions from people who should know better attempts to make President Biden seem as bad and as out of touch with "regular" Americans as former California Governor Jerry Brown.
Brown inherited a massive fiscal problem, environmental disasters, and a state undergoing rapid social, economic, and cultural challenges. Not only did he get re-elected, he left office after doing a better than average job of addressing the problems. You'll note that he did not create a cult of personality, end democracy in California, jail his enemies, and avoid making hard decisions.
So, I'm not sure why Politico thinks comparing President Biden to Governor Brown is a bad thing. In their world, of course it's an awful, sick burn. But what they fail to grasp is that, when everything goes wrong, you want a Democrat in office instead of a Republican. You want leadership that at least has a grasp on real problems. If you look at what has happened in California during COVID-19, there's no way to conclude that Gavin Newsom has done everything the right way. But, if you compare him to Abbott in Texas, Kemp in Georgia, and DeSantis in Florida, there's no way you'd pick any of them over any Democratic governor in the country.
Nothing in this country is ever solved instantly and that's why political hacks don't understand how to govern and lead complex governments. They don't understand that making structural reforms, setting an agenda that provides guidance to state or Federal agencies, and making difficult budget choices is what Democrats routinely do in a far better manner than their GOP counterparts.
And I really don't think people get this point--there is no cult of personality around President Biden. When he screws up, his only effective critics are fellow Democrats. Yes, I want him to raise the cap on refugees, stand up to our foreign adversaries, pull our troops out of Afghanistan, and punish everyone who stormed the Capitol on January 6. I want him to pack the courts, raise the minimum wage, and do whatever it takes to deliver COVID-19 relief to people in this country and around the world. I am sorely disappointed when he doesn't do what I think is the right thing. But he is a million times better than Trump or anyone Republican. There's no comparison to what we just went through as a country.
Maybe I'm still feeling traumatized, but, up until the moment Joe took office, I was pretty concerned for our future. Now, I can see the long game and the slow approach rooted in common sense and following the law that President Biden has chosen and I am learning to be patient. And grateful, too. But I am not blind to the fact that there are still far too many people in this country who are inventing bullshit out of thin air in order to cause our country to fail.
on April 17, 2021