Matt Gaetz Is Totally Not a Pervert At All 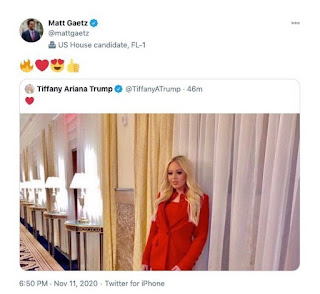 It is disgusting behavior.

Representative Matt Gaetz is in the kind of legal trouble pervy dudes get into when their house of cards comes down around them. One too many binges, one too many weekends spent ignoring the folks back home in order to get into the good graces of the only person on Earth who could give him a pardon for his crimes (It's entirely possible that Gaetz was given a "secret" pardon by Trump and we don't know what it is. I'm thinking that this probably wasn't done because Gaetz is facing an array of crimes that could be prosecuted in different jurisdictions).

This kind of shittiness exists because Republicans vote for horrible people. That's entirely our problem right now! The worse the moral character of the person, the likelier they'll get a lot of GOP voters to send them money and pull the lever for them on Election Day.

Personally, I love the fact that no Republican anywhere can lecture me on anything. Everything they believe is bullshit and they will never, ever have the moral high ground on any issue ever again. Their world is gone and it isn't coming back. All they have now are the scumbags and people of low character who are waiting for the knock at the door.