Henry Olsen is a Ridiculous Buffoon 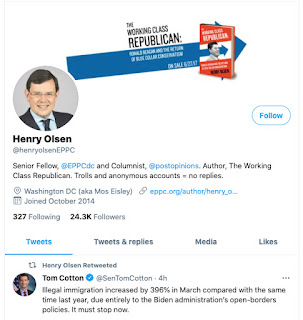 I'm going to give you one guess when it comes to Henry Olsen's party affiliation:

Good Friday’s jobs report was good for the country. But it may be bad news for President Biden’s agenda.

The unemployment report showed that the economy is springing back as more Americans get their covid-19 vaccinations. It had long been obvious to anyone paying attention that pandemic restrictions, more than financial distress, have been keeping the economy down. Most of the missing jobs were in sectors such as education or restaurants, which were wholly or partially shut down by efforts to keep the virus in check. It stands to reason that as those restrictions are relaxed, jobs would return. That’s exactly what happened last month, as more than half of the 916,000 new jobs were added in the hard-hit entertainment and leisure and education sectors.

These increases occurred before a single dollar of Biden’s stimulus package found its way into Americans’ bank accounts. It follows that increased employment will naturally occur as more pandemic-based capacity controls end, and as more Americans are vaccinated and feel comfortable resuming their pre-pandemic lives. Biden’s $1,400 per-person checks may make those people likelier to spend more, but they won’t change the underlying employment dynamic. That was always being driven by government regulation and social fear. Instead, the new money will likely make Americans more willing to pay more for things they would have bought anyway. There’s a word for that: inflation.

So, more jobs in America means bad news for President Joe Biden. Got it.

An increase in Americans working means oh, shit, Democrats are in trouble! I don't think so.

If more Americans are going back to work, Joe Biden doesn't care who gets credit for that. He's probably happy for those folks no matter what. More people working means we're a step closer to getting out of the ditch that a failed Jamaica Estates real estate developer put us into.

If the stimulus package didn't send those folks back to work, then wait and see when it really starts to kick in and restore the economy. I'm going to go out on a  limb here and say that we created more jobs recently because the U.S. government isn't being led by a pie-faced screaming bag of meat who makes everything about himself and works on behalf of idiots, toadies, Russia and his assorted incompetent billionaire shit head friends. We might be creating more jobs because people are finally seeing the effects of competent leadership.

Inflation? Sure, why the hell not? When you tank the economy, there are bound to be problems. But, news flash. President Biden didn't tank the economy. He's actually fixing the economy. And Americans approve of the job he's doing in overwhelming numbers.

So, sit down, Mr. Olsen. Take your buffoonery somewhere else. We're not buying you kind of crazy around here.