Baseball Billionaires Who Give Money to the GOP 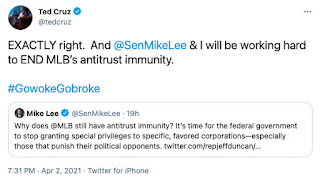 This is basic conservative ideology in 2021. The government should pick who wins and who loses. And unless you do what Republicans want, you're going be a loser. It's as if Cruz and Lee forgot that they are in the minority and can't do jack shit. It's all posturing and preening for the rubes. This is about shaking money out of the tree and nothing more. Helluva way to represent your constituents.

Revoking Major League Baseball's anti-trust exemption would go against the precedents established by the Supreme Court and foul up the sport's ability to run things the way that it has always run things. It would be a massive advance for labor rights, for example. So, if Cruz and Lee want to do that, hey, have at it.

I mean, what would happen if a bunch of billionaires suddenly went bankrupt?

In its one-paragraph opinion, the Toolson Court provided two main justifications for maintaining baseball’s antitrust immunity. First, the majority noted that Congress had been aware of the Federal Baseball ruling for 30 years, but yet had not taken any steps to apply the antitrust laws to MLB. Indeed, Congress had just held extensive hearings regarding baseball’s antitrust status about a year before the Toolson case reached the Supreme Court, hearings that concluded without the passage of any legislation subjecting MLB to the Sherman Act. This suggested the legislature may have intended for baseball to remain protected from antitrust law.

Second, the Court feared that any decision reversing baseball’s antitrust immunity would unfairly subject the sport to retroactive liability, holding MLB legally accountable for activity that it had reasonably believed was beyond the scope of the antitrust laws. Because any monetary damages in federal antitrust suits are tripled, the Court may have even feared that MLB could potentially be driven into bankruptcy if countless current and former players affected by the reserve clause were freed to file their own antitrust lawsuits against the league. In light of Congress’s inaction and these retroactivity concerns, the Toolson opinion closed by declaring that any change to baseball’s antitrust exemption should come from the legislature, not the judiciary.

Take the group that now owns the Atlanta Braves. They would be driven out of business. Some thanks! The Liberty Media Group has given a lot of money to political candidates from both parties over the years, most notably to Donald Trump. I guess Cruz and Lee are ready to go forward with their Quixotic presidential campaigns without any money at all from a protected class of American billionaires and ownership groups that all have deep pockets. The Democratic Party would be happy to sweep up those donations, I'm fairly certain.
All throughout the country, billionaires should be paying attention to what the Republican Party says it will do to anyone who believes in social justice and standing against hatred and bigotry. Is this who you want to give money to? Is this worth the hassle of boycotts and having Rachel Maddow explain why you suck? Some of these people have to live in communities where there are activists and real leaders. It's one thing for Cruz and Lee to shit all over the people who elected them. It's entirely something else when your business might fail because of a single well-organized boycott. You can either tell more than half of the people who want to do business with you to go fuck themselves or you can act like an American citizen who believes in democracy and decency. You can't do both.
Watching Republicans shit themselves as the culture leaves them behind is as good as watching a ballgame anyway.
on April 03, 2021