Yes, It Matters Who Wins Elections in This Country 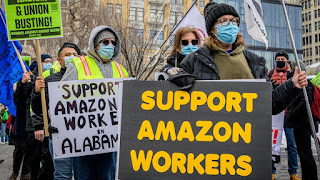 It is pretty shocking to see that the President of the United States has made a pro-labor pronouncement in the media. It shouldn't be, but it is:

In a statement aimed at Amazon, US President Joe Biden has warned companies against intimidating staff considering joining a labour union.

Mr Biden said "the choice to join a union should be up to the workers - full stop".

His remarks come in the middle of a historic vote in Alabama, where Amazon warehouse workers are deciding whether to join a union.

It is the first such vote Amazon has faced in the US since 2014.

It follows months of criticism of the e-commerce giant for falling short of coronavirus safety precautions, while making high demands on workers during the pandemic, when its business has boomed.

In his video remarks, Mr Biden did not explicitly back the union effort, nor did he mention Amazon by name. However, he said the White House was committed to the right to collectively organise.

Amazon definitely needs to organize itself into a union, one to protect rank and file employees on the website side and one to protect the rights of the workers who process, ship, and deliver the items ordered on the site. I mean, you could break that down even further, but it it pretty clear that there are a lot of workers being exploited after being displaced from other areas of the economy.

Having a pro-labor president matters. It matters in terms of the quality of life that millions of Americans are hoping to have in the future. It matters for the future of Obamacare in terms of providing health insurance to Americans. And it matters as a function of raising the minimum wage, providing safety guarantees for workers, and for rolling back decades of anti-labor policies. That is not to say that the Obama Era wasn't pro-labor or anything like that. Eight years of Bush and four years of Trump hurt so many people that it would have been wonderful to see the Obama Era as one where things could have been accomplished. Republican obstructionism in Congress saw that very little got done.

Supporting the formation of unions and supporting labor in this country should deliver votes for Democrats. Here's hoping that the people who get raises and do better turn around and vote Democratic from here on in. We have to lift more and more people out of poverty and we have to support the rights of workers. We have to do better.