The Worst Job in America 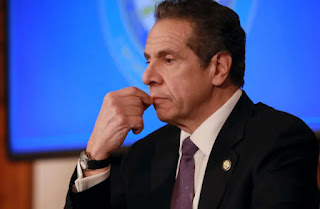 Is there any job in politics that is guaranteed to be the end of your career? It looks to me like getting elected Governor of the State of New York is a sure fire way to end up in oblivion.

Just shy of a year from New York Gov. Andrew Cuomo's star turn in Democratic politics for his internationally acclaimed COVID-19 press briefings, members of the governor's own party are calling on him to resign.

Impeachment is also on the table, with New York's process closely mirroring that of the US Congress. Once considered a remote possibility, Insider obtained a letter on Tuesday from six Democratic lawmakers in the NY legislature calling for articles to be drawn up. Another Democrat in the Assembly told Insider that the unlikelihood of Cuomo resigning makes impeachment all the more important as a remedy.

"He should resign, but because that is dependent on him, we also need to be willing and ready to investigate and impeach," Assemblymember Yuh-Line Niou, a Democrat whose district covers Manhattan's Financial District and Chinatown, told Insider.

We should believe these women until we see indications that they are part of a political hit operation carried out by Cuomo's enemies. You should not be naive enough to consider that possibility. It is far more likely that Cuomo's shattered personal life and poor choices are to blame. But don't discount the sophistication of how these revelations have sunk him.

Long before all of this happened, Cuomo was easily one of the most hated Democrats in the country, somewhere out there with Rahm Emanuel and flaming gonorrhea. He earned this distinction by being a heavy handed asshole of epic proportions, somehow able to anger the people who were supposed to support him and infuriate the ones who would never vote for a Republican. He was rarely charming but always ready to back the initiative most likely to hurt the people who wanted to give him their support. He was incandescently wrong about everything and had the political instincts of a dynamite salesman in a town that made nitroglycerin and fine china.

Eliot Spitzer was taken out by a political hit engineered by Roger Stone. The fact that we don't grieve the Spitzer Administration is because he was an asshole who mistreated the women he paid for sex. It really isn't complicated when you think about it. Had we simply rejected his overwrought brand of assholery in the first place, we could have had a better outcome. Character matters. How someone treats other people matters. Cuomo has always been a significantly compromised horse's ass. What little good he accomplished is washed away because he took the worst job in American politics. When you're governor of New York, you better be perfect. If not, good luck, sucker.

Having said that, of course he should resign. Given what has been done to remove him from office, this is clearly a political hit job hatched by people who stand to make a killing in Albany. I don't know who stands to get rich because of the removal of Cuomo but they have to be salivating right now.

This sort of thing would never force the country to call for the removal of a Republican. It certainly wouldn't move the needle in terms of getting someone like Trump out of office or keep him from running again. There are at least 26 very credible accounts of Trump being an out of control sex maniac and all it has done is make him more popular among his supporters. This is a stain on our public discourse. You see, there's one truth in America. You can sexually harass and assault people but only when there's an "R" by your name and only when you're an overweight, crass white man. We have enshrined this in our politics. Cuomo should switch parties. Then, and only then, could he get away with being crude to some young women.

It would be great if we could arrive at one standard. If you're a sexist, degenerate asshole to people and if you use your position of power to intimidate or coerce someone to have sex with you, then you should lose your job. That includes all of the powerful white men who do this, Democrat or Republican. I'd have no problem with this if that were the new standard of being able to serve in office.

The Democratic Party has a deep bench. There are scores of people who are qualified to take over if we purge these jackasses out of the party. The Republican Party would end up with a handful of old women running things and most of them would probably have to switch to being independents just to survive in the primaries but there you have it. Don't expect consistency.

Always be ready to live with the hypocrisy of today's political standards. And stop supporting toxic assholes. Nothing good ever comes from it and you end up with the sad farce of the end of Andrew Cuomo's career staring you in the face.