Get to Know Bruno Joseph Cua 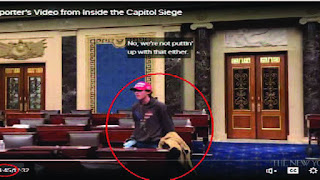 At eighteen years of age, Bruno Joseph Cua has already gotten himself into a lot of trouble. Here he is in the Capitol itself on January 6.

Right-wing garbage outlets like American Greatness want you to think that his youthful indiscretion was just a little rambunctious and harmless. In reality, they're ignoring the fact that Cua has been denied bond because he assaulted a Federal officer: 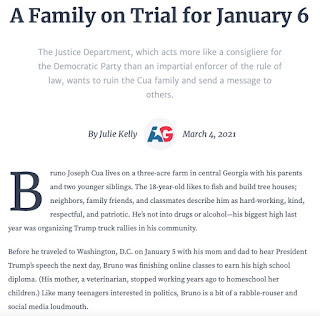 No link because fuck those assholes. He's not some precocious little kid. He could have murdered someone. Cua has a long history, even at his very young age, of terrorizing people:

[prosecutor Ryan] Buchanan, however, told the court that Cua had a history of belligerent behavior. He said the government has letters from people who allege Cua terrorized and harassed people in his neighborhood going back years.

In one incident, according to Buchanan, Cua allegedly tailgated a person with political stickers supporting Democrats while blaring his air horn and flashing his lights. Then he cut the other driver off. On the stand, Joseph Cua dismissed the neighbors as “a bit spiteful.”

The Atlanta Journal-Constitution learned of another incident Dec. 8 when Cua sped around the parking lot of Birmingham Falls Elementary School in a pickup flying a large Trump flag. His father filmed him, as Cua’s younger brother and friends watched. According to the police, the air horn violated the city’s ordinance against public disturbances, and he was issued a citation.

On Jan. 3, two days before Cua and his parents drove to Washington, Cua was cited with a warning for trespassing in Milton’s White Columns subdivision. The subdivision’s security guard said Cua jumped the gate and was “disrespectful and using profanity” when confronted by the homeowners association president.

Cua was arrested by the FBI Feb. 5 when he went to pay the citation for the public disturbance incident.

Yeah, he sounds like any other normal teenager who is "interested in politics," doesn't he?
Cua is just another example of how we coddle right wing agitators in this country while, at the same time, demonizing anyone who agitates peacefully or otherwise from the left hand side of the political spectrum. He has demonstrated a propensity for violence, extremism, and has openly called for weapons to be used against his enemies. He is, in other words, a classically defined domestic terrorist. He's not even really a believer in America or democracy because, when it became apparent that his candidate was not going to win, he resorted to violence.
Framing him as helpless and just another dipshit ignores the very real danger that these people present going forward. You're going to see and hear from a lot of similar individuals. Let's hope that we can survive the next few years.
UPDATE:
If you can't do the time, don't do the crime:

A teen, believed to be the youngest suspect arrested in connection with the U.S. Capitol riots, has been punched by a fellow inmate and tested positive for Covid-19, defense lawyers said Monday.

Bruno Joseph Cua, 18, is asking to be released from the the Grady County Jail in Oklahoma where he's largely been in solitary confinement since being arrested on Feb. 5, defense lawyer William Zapf said in court papers seeking his client's pre-trial release.

"Mr. Cua was assaulted and then threatened by a fellow inmate over this past weekend," Zapf wrote. "We understand that the inmate struck Mr. Cua in the face with his open hand, injuring his nose, over the use of the phone, and then threatened him regarding the incident."

And on Saturday, a Covid-19 test for Cua came back positive, Zapf said, and his lawyers argued that he's ready to safely self-quarantine, perhaps at a hotel, if released.

But Assistant U.S. Attorney Kimberly Paschall argued that Cua "poses a significant danger to the community" and that his social media postings "show clearly the radicalized mind of a young man fixated on stopping the normal functional of democracy."

The "nature and seriousness of the the danger to any person or the community strongly favors detention in this matter," Paschall responded.

The prosecutor didn't address the alleged assault of Cua, who is from Milton, Georgia, while in custody. But she did cite the multiple photos taken of him during the Jan. 6 uprising at the U.S. Capitol, all appearing to show the suspect without a mask.