CrossFit is Trying to Save Itself 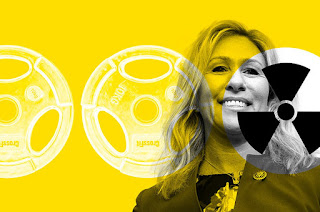 Some Republicans are just too toxic for companies to be affiliated with:

With every pull-up, power snatch, and hotel-room burpee, Marjorie Taylor Greene used CrossFit to build her brand, from gym owner to the House of Representatives’ most visible far-right conspiracy theorist. Before and during her political rise, CrossFit’s headquarters ignored Greene’s existence and her praise of the company’s workout programs — until now.

CrossFit for the first time disavowed Greene after BuzzFeed News asked in February about her history of calling for violence against political enemies, support for QAnon, attempts to undermine the 2020 presidential election, and amplifying other dangerous and deceptive nonsense. “CrossFit supports respectful fact-based political dialogue to address our common challenges, and we strongly oppose the loathsome and dangerous lies attributed to Ms. Greene,” Andrew Weinstein, a CrossFit spokesperson, told BuzzFeed News.

It started with Greene using her time as an affiliate gym owner to build her credibility as a small business owner. Then she asked for campaign donations and invited at least one gym member to donor events when she launched her congressional bid. Now, in Washington, she points to her time as an athlete and CrossFit affiliate owner to push her political agenda — like her viral hotel room workout in Washington, DC.

Being associated with a transphobic, racist asshat is not a good look for any brand right now, especially as we transition out of the COVID-19 era. Taylor Greene is one of the most prolific hate merchants in the country. She's not the future of anything. Companies like CrossFit are looking at the rollout of the vaccination program and they're seeing the light at the end of the tunnel. The last thing they need is for people to turn their back on the CrossFit brand because of Taylor Greene's insane brand of American demagoguery.

On the one hand, yeah, it's possible to feel bad for people who end up associated with this trash. Hyatt Hotels hosted CPAC and then CPAC went with a presentation stage shaped like a Nazi rune. Who does that? (Today's conservative movement, of course). The CEO of Goya has doubled down on his love of Trumpism. A whole lot of people deserve to be boycotted for their support of Trump's brand of white supremacy and incompetence. So be it.

But seriously, what were you thinking, Hyatt Hotels? Someone needs a wake up call.