America Needs to Walk Away From Britain's Royal Family 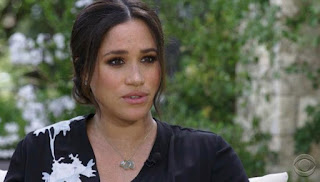 Meghan Markle did not discover or reveal anything that was not already known about the British Royal Family. They are insanely racist and in cahoots with the British tabloid press. The only way this ends is with Markle and Prince Harry divorced and with him married to a suitable white woman. They refuse to accept any other situation and so we have royals in this country, living in exile. It's happened before.

The larger point here is that Prince Andrew refuses to cooperate with a criminal investigation into pedophilia in the United States. His close friend Jeffrey Epstein had a mountain of material that could incriminate an untold number of powerful men and, we, of course, are never going to see any of that. But I would have to believe that there is credible evidence that Andrew has broken U.S. laws as well as engaged in conduct that is devastatingly evil. Will we ever get to the really important part where he is deposed and investigated fully in this country?

If not, why should any member of the Royal Family be allowed to enter the United States, aside from Prince Harry and his wife and children? The U.S. government could offer them asylum.

The love affair with all things Royal needs to end. The English people are never going to turn on the Queen and they are probably convinced that Markle is the one to blame here. At the end of the day, who cares what an isolated, xenophobic, dying empire has to say? Let everyone who wants to leave England go. Let the Scots and Welsh have their own nations. Let the Irish reunite. It's all long overdue.