When Will the People of Texas Turn on the GOP? 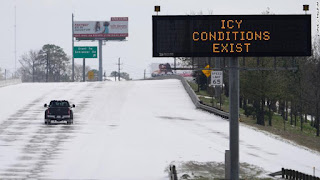 I just don't know if this is the thing that will do what decades of neglect and incompetence couldn't do:

Elijah Dorminy's family has depended on their generator to make it through the deadly cold and power outages that have plagued Texas since early Monday morning, and he is worried soon even that won't be an option.

Dorminy, his wife and their four children are worried what will happen when they need to refill their generator with gas again. Only one gas station still had fuel in Watauga, the suburb of Fort Worth where they live, Dorminy said.

"Pray for us, this is going to be rough," he told CNN.

More than 4.3 million households and businesses were without power in Texas on Tuesday morning as a result of a winter storm and freezing temperatures that swept into the state Monday. The entire state was below freezing from Monday into Tuesday morning, and utilities have been knocked out or frozen over by the bitter cold -- leaving many without primary means of heating their homes.

Everything in Texas is designed to keep the Republican Party in firm control of the government. Each and every district is heavily Gerrymandered at the local, state and Federal levels. You have congressional districts that look like they were designed to elicit fits of laughter. You have a state GOP party apparatus that doesn't believe it will ever lose power.

Texas has its own power grid because it refuses to submit to Federal regulation. And yet, after threatening to secede, where did Abbott turn for help? The Biden Administration was quick to offer a hand. This is the difference between conservative boogaloo governance and decency in public service. I just don't think the Proud Boys are going to be bringing generators and space heaters around to everyone who needs one.

It all comes down to the voters. We need civic engagement. We need people to start caring again. We need for people to realize that if they keep pulling the lever for politicians who put a failed ideology ahead of common sense, the same results will keep piling up.

This is the state, after all, that sent Ted Cruz back to the Senate. This is the state where Ken Paxton stays in office despite being under investigation for some of the most obvious acts of political corruption ever seen. And this is home to Governor Greg Abbott, who has single-handedly botched every crisis thrown at him, up to and including this one.

I lived in Texas. I know what it's like to go through a crisis is a state run by Republicans who don't care about anyone other than their rich donors. I know what panic, gas shortages, and mismanagement look like. That's why I don't live there anymore.

This is how bad things are:

The situation is dire in Austin. We’re without power and heat with no end in sight amidst frigid temperatures. My wife and I still have running water. Others have had pipes break. There needs to be accountability for what happened. Right now the priority is to keep people safe.