The Party of Family Values 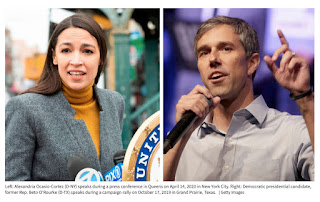 The Democratic Party is the party of family values. When your family is in trouble, Democrats are there to help.

Two politicians are helping to provide resources for residents in Texas who went days without electricity, heat, or running water, while the state’s own Sen. Ted Cruz (R) is under fire for flying to Mexico with his family.

This week, Rep. Alexandria Ocasio-Cortez (D-NY) and former Rep. Beto O’Rourke (D-TX), who narrowly lost to Cruz during the 2018 midterms, worked to provide Texans with supplies and conducted welfare checks, respectively, after the state was hit with an unprecedented winter storm.

Millions of people in Texas went without power for days after the winter storm took out the state’s power grid, and the American South has seen record-breaking freezing temperatures. At least 47 people have died as a result of the extreme weather as of Friday, including at least 30 people in Texas, according to the Washington Post.

Ocasio-Cortez tweeted Friday that the relief fund she set up raised more than $2 million in one day and will benefit five Texas-based organizations. She also said she would be traveling to Texas on Friday to “distribute supplies and help amplify needs & solutions."

“Charity isn’t a replacement for good governance, but we won’t turn away from helping people in need when things hit the fan,” Ocasio-Cortez tweeted.

When your family is freezing to death, the Republican Party is the party of me first, motherfucker.