The Oath Keepers Are an Anti-government Hate Group 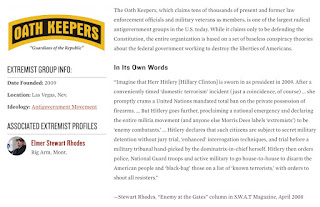 This is what you get when a Republican-controlled Congress insists on preventing the Federal government from investigating white supremacists and hate groups. You end up with the Oath Keepers, among other groups, and you reach a point where things have gotten out of hand.

When they get around to figuring out how the January 6 attack on the Capitol really happened, you'll be able to draw a straight line from the early, heady days of the so-called Tea Party movement, the rise of anti-government white supremacist groups, and the mainstreaming of the idea that it's perfectly okay for Republicans to associate with people who think it's okay to terrorize anyone who disagrees with their hateful ideology.

It will take a generation to undo all of this damage and we had better start right now.