The Media is Keeping the Republican Party Alive 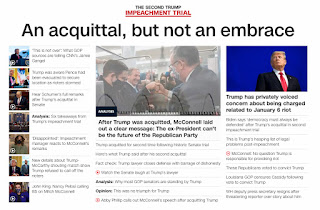 I suppose I could pick on CNN here, but, really, the whole sorry television and print media business is guilty of sustaining the legitimacy of a Republican Party that is perfectly okay with unhinged violence and killing people in the name of holding onto political power.

What happened today in the United States Senate was equal parts atrocity and farce. It was a crime against the idea of living in a republic and a tragic example of what it means to live in America at a time when money and media bullshit sustains the careers of people who should have been shamed out of public service years ago. You couldn't satirize today's GOP and you couldn't invent a character like Trump because he is the ultimate crime against common sense.

At the end of the day, Trump's impeachments will go down as exercises in trying to hold him accountable when the media plainly won't do its job. Trump and his enablers should not be treated like legitimate politicians or leaders. They have surrendered to a worship of money and power. It's always a game of who's winning and who looks like a fucking loser. In reality, you had Representative Jamie Raskin and his powerful, coherent argument in favor of holding someone accountable for inciting an insurrection against the Legislative Branch of government and the Office of the Vice President of the United States. On the other side, you had a shit show made out of dickweed opinions hatched in the gutter and little else.

The Democrats in the House did their job, and they were joined by a handful of Republicans.

The Democrats in the Senate did their job.

Seven Republican Senators did their job.

Everyone else said nah.

That's America for you. Everyone who didn't do their job should be ignored, shamed, and ostracized. In a week, they'll see the donations come rolling back in (I'm guessing) and they'll all be back on the Sunday shows. We'll then start talking about how they have made up their mind to SOLVE THE PROBLEM OF THE DEFICIT OH MY GOD and why Joe Biden won't lead and man, those Democrats are doing a bad job of solving all of the problems that were dumped on them.

The media simply won't do its job. They can't stop letting the GOP have the upper hand when it comes to explaining themselves. They have to pretend that there are two sides to everything. When presented with sanity and insanity, there's no choice. When you're presented with a president who tells a mob to go kill the Vice President and the Speaker of the House, you'd think an attempt to decapitate the presidential line of succession would have caused someone to do the right thing.

Think of the people who went through the entire January 6 attack on the Capitol. Why should anyone show up for work there on Monday? If you're a Capitol Hill police officer, why would you show up and protect people who voted to give Trump another chance to send a mob your way? Why would anyone on staff show up for the next Trump insurrection riot? Why bother pretending to have a country anymore? It just doesn't make sense anymore.

Doesn't it feel like a line has been obliterated? Will we just go back to the same old, same old?

I have no idea.