The Calls Were Coming From Inside the House 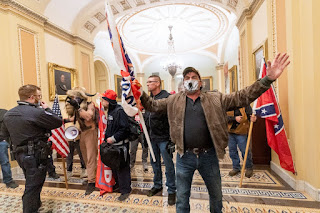 This is probably a big deal, but I can't get over the fact that the Representatives and Senators who openly sided with the assholes who stormed the Capitol are still allowed into the building:

Six US Capitol Police officers have been suspended with pay, and 29 others have been placed under investigation, for their actions in the January 6 riot, a department spokesman said Thursday.
"Acting Chief Yogananda Pittman has directed that any member of her department whose behavior is not in keeping with the Department's Rules of Conduct will face appropriate discipline," department spokesman John Stolnis told CNN.
CNN reported in January that the USCP had placed at least 10 officers under investigation, and two others had been suspended.

If I have one criticism of the aftermath of January 6 it's that the Republican Party have failed to identify and then remove members of their own party who gave aid and comfort to Trump's mob. There's no way Ted Cruz and Josh Hawley should still be in the United States Senate. There's no way that the dozen or more GOP House members who were trying to use their time on the floor to help the insurrection get off the ground should still be in Congress. I mean, that's a massive dereliction of duty on the part of the Republican caucus. It really is.

And the fact that so many Capitol Hill police officers turned out to be traitors, well. We have a whole other problem there.