Joe Biden Has All of Trump's Perfect Phone Calls 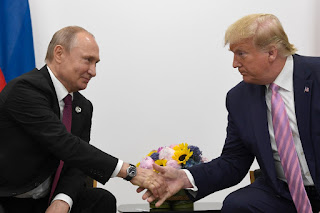 Yeah it's probably nothing but holy shit nonetheless.

Few Trump-era mysteries are as intriguing as what the 45th president said to Vladimir Putin in at least a dozen rambling, off-the-cuff calls and meetings over four years. Understanding what was said between the two could help illuminate whether Trump ever revealed sensitive information or struck any deals with the Kremlin leader that could take the new administration by surprise.

Now that President Joe Biden is in the White House, he can see for himself.

“They don’t need our approval to see those [records],” a former Trump White House official said, referring to the new Biden national security team. “Biden owns all the call materials. There is only one president at a time.”

The Biden White House did not comment on whether it had seen the content of the calls. But so far, at least, the National Security Council has not registered any complaints with their ability to access relevant call records from the previous administration..

“It is a national security priority to find out what Trump said to Putin” over his four years in office, said one former national security official who is close to the new president. “Some things, like what happened in some face-to-face meetings where no American translator or note-taker was present, may never be fully known. But I would be very surprised if the new national security team were not trying to access” the call records.

We have seen, repeatedly, clear evidence that Trump is not a thoughtful or discerning individual on the telephone. We have also seen him take extraordinary steps to ensure that the translators who have worked with him and with Putin have been under severe restrictions. So, what's there? Was Trump foolish enough to reveal classified information? Was he subservient to Putin? Was he stupid enough to admit to Putin that he was compromised and would do "anything" he wanted, up to and including selling out American interests?

My guess is that Trump was embarrassing enough to warrant hiding these calls and Putin was smart enough not to say too much, knowing that he was being recorded at all times. Trump has behaved as if he has no idea that he could possibly be recorded by any foreign intelligence service (hence, his use of an outdated, unsecured phone for the entirety of his presidency).

If the Biden people are smart, and we know they are, anything compromising will be declassified and released whenever it is reasonably discreet to do so. They don't want to be accused of being reckless but there is a historical need to understand what Trump said to Putin and an overarching need to ensure no future president acts in this manner again.