White America vs the Rest of America 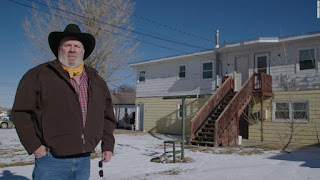 If you really feel like you're being left behind, vote for the candidate who will look out for you. If you vote for Republicans, why are you surprised when they cut your benefits and do nothing to help your largely rural part of the country? Conversely, why do we keep hearing stories about how these folks are being left behind when they won't vote for anyone other than Republicans?

Seems to me that if you cared about change, being taken care of, and wanting to be heard, you'd stop voting for the same people over and over again.

Most of the coal mined near Gillette sits on public land, meaning that the state government collects royalty payments and other taxes on its production. Wyoming doesn't have a state income tax and its property and sales taxes are notoriously low. Many years, well over half of the state's tax revenue comes fromthe coal, oil and gas industries.

After the bust, Carter-King said she knew Gillette would have rethink everything.

Gray told me that his call to CNN was influenced by how things fell apart with the oil and coal industries shortly before and after 2016, the year US voters elected President Donald Trump -- who'd promised to bring back "beautiful, clean coal." Nearly 90% of Campbell County residents voted for Trump again in 2020. But you won't find too many people in Gillette who believe Trump kept his promises to coal workers -- or that it was even possible to keep them.

Wyoming coal production peaked in 2008 at 468 million short tons, according to the US Energy Information Administration. By 2016, it was 297 million tons, creeping down to 277 million in 2019, nearing the end of Trump's term. Last year's figures are not yet available, but the Covid-19 pandemic's impact on demand for energy is known to have contributed to widespread collapse in the energy industry. 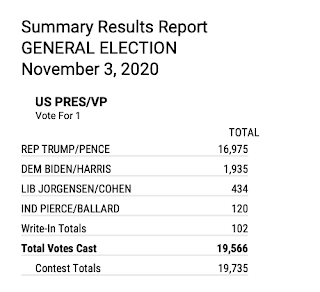 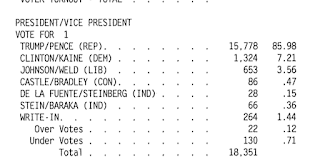 Voters in Campbell County gave Trump 15,778 votes in 2016. What they got in return was four years of insanity, fraud, confusion, neglect and white supremacy. After all of that, they turned out in 2020 and gave Trump MORE votes than they did in 2016.
And I'm supposed to give a shit? Well, as a liberal I do and as a liberal I want them to have jobs, opportunity, access to affordable health care, and the same chances everyone else gets. But it's really hard to square 2016 and 2020 against one another. The only thing Trump gave these people was the white supremacy and the insane bullshit he was famous for. And, what did they do? They all but screamed "give us more of that, please."
Please note that, when white supremacy wasn't on the ticket but Mitt Romney was, Obama/Biden got more votes in 2012, which was 2, 163. So, okay then.
Joe Biden's policies will do more for these folks than anything Trump ever did for them. He won't cut their Medicare or Social Security. He won't cut their SNAP benefits. He'll spend money trying to fix it so we don't burn coal, which destroys the environment. He'll invest in green technology that creates jobs. He'll offer programs to help people train for a new job. He'll prioritize the ability for kids from this region to afford college. Hell, he already gave them access to health care. The problem is, people in Wyoming keep voting for Republicans who deny them access to health care.
I mean, what the hell do you do when someone keeps voting against their economic self interests?
In the rest of America, which you can find in the rust belt, the blue states, the red states, the purple states, the ones that are struggling and the ones that have large cities, people already know that they will hold Biden and Harris accountable. They already know what to expect and what to do because they voted for it in 2018 and 2020. The problem is, white people in America will not give up the fever dream of being able to vote for Republicans and then blame Democrats when nothing good comes their way.