What's This About Not Being Able to Pardon Myself? 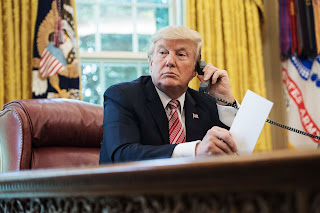 As that great political scientist Richard Nixon said today, thanks to a thousand years of English Common Law, no man may be his own judge.

To a fumbledick autocrat, there is no question--a self-pardon is a right granted by God when the rubes were foolish enough to hand them the power they refuse to relinquish. It is not a stretch to assume that Trump is surrounded by incompetent boobs who are desperate for face time and willing to stretch the truth to convince him that he can, in fact, pardon himself.

The problem is, he cannot.

Trump has gone insane anyway. He will be declared incompetent and live out the rest of his days in soiled diapers and a bad mood.

The act of pardoning oneself could be seen as obstruction of justice. So add that to the pile of things that Trump could be charged with and tried for.