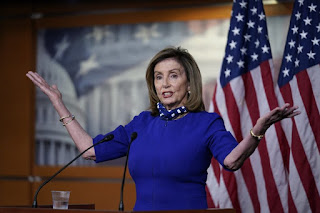 House Speaker Nancy Pelosi is planning for the post-Trump era. She is preparing her caucus for a round of legislating that will restore the economy, deal with the COVID-19 pandemic, and secure President-Elect Joe Biden's legislative agenda. She is mentally and physically done with the Trump era and wants it to end as soon as possible.

However, she will impeach this motherfucker one more time:

House Democrats are formally unveiling their resolution to impeach President Donald Trump on Monday, charging him with "incitement of insurrection" for his role in last week's riots at the US Capitol.

The single impeachment article, which will be introduced at 11 a.m. ET when the House gavels in Monday, points to Trump's repeated false claims that he won the election and his speech to the crowd on January 6 before pro-Trump rioters breached the Capitol. It also cited Trump's call with the Georgia Republican secretary of state where the President urged him to "find" enough votes for Trump to win the state.

"In all this, President Trump gravely endangered the security of the United States and its institutions of Government," the resolution says. "He threatened the integrity of the democratic system, interfered with the peaceful transition of power, and imperiled a coequal branch of Government. He thereby betrayed his trust as President, to the manifest injury of the people of the United States."

The impeachment resolution is Democrats' first step toward holding an impeachment vote this week to make Trump the first president in history to be impeached for a second time.

I think the strategy here is to engage in a full court press that keeps Trump occupied so that he doesn't have time to call up Erdogan in Turkey or MBS in Saudi Arabia and arrange for asylum.

Don't question Pelosi's skills or strategy. She is way ahead of everyone else and I have seen smart people go broke betting against her.