So Long, You Piece of Shit 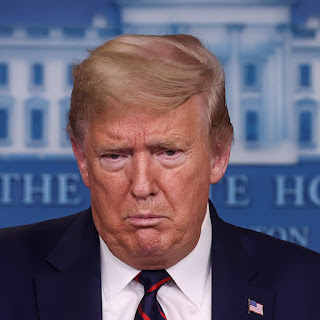 We should only consider Trump in the past tense. He has no future, no promise, no possibility of redeeming himself.

There is still one more full day to consider him in the present tense.

He should never have been elected president. The Republican Party is forever tainted by its association with the worst president in American History.

He is incapable of shame. Republicans have submerged the gene that allows humans to feel shame in a vat of acid and they have burned it out of their souls.

He is a shit bird.

He hates dogs, and dogs hate him.

His presidency killed so many people that we'll never get a full accounting of it.

He is a monster of a human being, incapable of normal human interaction and exchanging basic information with other people.

He is like a live wire cable that comes off a pole and starts thrashing around, whipping itself into a frenzy. There are sparks everywhere, the thing is out of control, and when it flies over your head and takes out something behind you, that's when you know you're screwed.

The entire country was this level of screwed for a full four calendar years. The wire lashed out and electrocuted and destroyed so many lives, wiped out promise, charred hope so bad they couldn't identify it. The last sparks are dissipating. The power has gone out of it. A few volts are all that is left, so don't touch the goddamned thing. Just run from it. Run, and don't look back.

It used to be that the American character was full of promise. This guy could do good things for us, that guy could solve this problem, that woman could be a transformational president who would work hard to fix things.

Not anymore, we'll never fall in love with anyone who claims to know what they're doing. We will always wonder, "when will they act like Trump? When will the worm turn? When will they start screaming at some poor woman in the corner with a binder and a confused look on her face? When will the howling begin? When will this person end up being another Trump?"

The babies around us, they won't remember Trump but they'll grow up and absorb the shock of it all. They'll hear an uncle talk about losing his wife to COVID-19, a grandfather's picture will serve as a reminder of what was lost, a mother who is still paying off debt, a father that left and never came home, unable to cope with it all. Cousins with stories about being hungry, about losing two years of school, of being behind and feeling helpless. They'll wonder about the burdens that their family still carries, and this will be twenty fucking years from now, opportunities lost, a story about how they used to live in a house in that part of town but then they had to go live in an apartment on the other side of town and then a job opened up so they had to move and so on.

There's kids that haven't even come into this world and they'll grow up in a traumatized society. Think about that.

We'll have to live with this for the rest of our lives, four years of watching goddamned Donald Trump run wild like a naked, shrieking madman across the front yard of an insane asylum, flinging his own shit at decent people who haven't even been given a butterfly net that can catch him.

So long, ya piece of shit. No one will miss you.