Raise the Minimum Wage to $15 an Hour 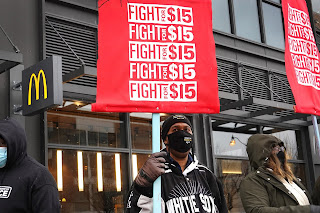 This is what everyone needs to fight for if they want to have their country back:

President Joe Biden on Friday is expected to introduce his proposal to raise the federal hourly minimum wage, which has been stuck at $7.25 since 2009. Biden will begin the process by requiring that everyone working for the federal government be paid a minimum of $15 an hour.

Organized labor and its supporters have been agitating for a $15-an-hour minimum wage for nearly a decade, but shifting political winds, the embrace of populism by both parties and widespread financial pain for Americans at the bottom of the income spectrum make a minimum wage hike a policy whose time may finally have come.

“If the federal minimum wage were to be raised it would provide a much-needed financial shot in the arm for many of those still in a position of financial fragility,” said Mark Hamrick, senior economic analyst at Bankrate.com.

Resistance to raising the wage floor has waxed and waned over the years, he added. “Before the erosion of the political middle ground in recent years, the idea of a federal minimum wage was far from controversial. It was seen as helping the economy and also reflected a statement that labor was valued.”

There are symbolic acts that mark the end of Trumpism and then there are substantive changes that could be made to lift people out of poverty and make the lives of working Americans better. We all need to fight for a raise in the minimum wage. No compromises, no wishy-washy tactics, no leaving anyone behind. The right to work 40 hours a week and get paid a living wage is a great place to stake a claim on the future of America.

Remember that every time someone raises the minimum wage, jobs don't disappear. When they argue that it will hurt the economy, laugh and tell them that the pandemic has done more damage than anything else. When they argue people don't deserve it, remind them that lifting single mothers and their kids out of poverty is worth every penny.

In terms of what the government pays out in SNAP assistance and other benefits, raising the minimum wage takes pressure off of those programs and frees up resources. Raising it to $15 an hour helps people live their lives with dignity.

We gotta fight for this and we have to support every effort to get it as close to $15 as possible.