Dogs Are Back in the White House 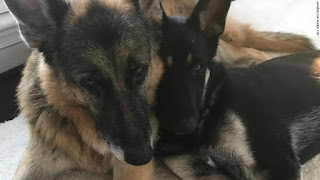 Major shade from the people who witnessed many, many meltdowns and screaming matches before the Biden showed up with dogs to make the place normal again:

The new President and first lady settled in at the White House this weekend, and did so with extended Biden family members.

"The residence has life in it again," a White House source told CNN of the energy inside. "It's the honeymoon period where everything feels new."

There were nighttime movie binges in the White House movie theater, complete with snacks from the White House kitchen cooks, many of the Bidens' five older grandchildren piling into the seats to watch, said another source familiar with the activities. The increased activity was met with pandemic precautions, including mask wearing.

On Sunday, the first dogs arrived from Delaware, where they had been waiting until things were unpacked and settled enough to allow a comfortable entry for the two German Shepherds at their new pad.

"Champ is enjoying his new dog bed by fireplace and Major loved running around the South Lawn," the White House said a press release early Monday morning. Champ lived at the vice president's residence during the Biden's time there, and Major was adopted by the family in 2018 from a Delaware pet rescue.

It should be the practice of everyone to adopt a rescue pet. In and of itself, it would heal the soul of this nation.
on January 25, 2021