Another Shameful Week of American History 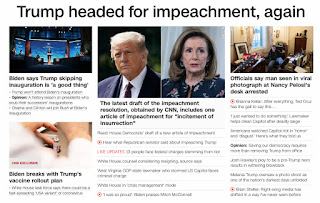 I could write about any one of those stories and still not capture the entirety of this shameful week of American history.

Trump's four years in office will go down as the most reprehensible period of American decline we have ever faced. It has been a rapid descent into chaos, madness, racism, bigotry, corruption, fraud and lawlessness and I haven't even captured it all with those terms.

It will not be enough to prosecute these people. If you were a Trump official, you should never hold public office or responsibility again. A vast number of these people should be shamed out of public life forever. Even the ones who barely lasted for a full Scaramucci.

American history now resembles that of the banana republics we used to invade. The shocking, degenerate acts of Trump supporters give our enemies a lot of fodder. Our defense department is completely without focus or leadership.

God have mercy on us all.