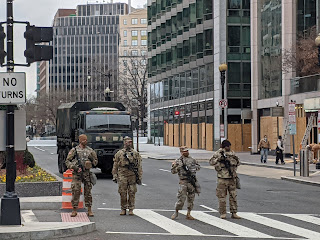 Whose idea was it to put these troops out there? We don't have a functioning Department of Defense leadership team. We barely have anything that resembles a government right now. What you're seeing is the bests we have given the chaos and confusion that is rife within the U.S. Government right now. God help us all.

Thanks to Trump and his enablers, Washington D.C. looks like it would if we had been forced to declare martial law in the wake of a major terrorist attack.

This is not a good look for a country like ours to have troops in the streets, manning barricades while low functioning idiots test the security parameters and get busted with ammunition in their cars.

I don't know about you, but there are probably a lot of crazies out there who want to do something but just haven't figured out what that will look like. Because of them, we do need these protocols in place. It's good to have a heightened awareness and vigilance and every inauguration has a security plan that needs to be carried out. But the closures and the fear of right wing violence are over the top this time around. Not since the "Michigan Militia" days of the 1990s has it really felt like our fellow citizens have lost their goddamned minds and gone over to the dark side.

But yes, the ransacking of the Capitol was a domestic terror attack, likely facilitated and carried out with insider assistance and directed by the man who lost the presidential election. How shocking is that to think about?

There's no debate. It was carried out by Trump and his supporters. They have all been caught in the act but the "evidence" of that attack is being held by a Justice Department run by highly incompetent and compromised people who are Trump supporters. The U.S. Attorney in Washington D.C. is also highly compromised and desperate to run out the clock.

What would be wonderful is if Wednesday comes and goes in the most normal and quiet of manners, an inauguration that ends the Trump Regime's stranglehold on America's psyche forever. A return to decency and responsible governance. A moment of accountability is needed for Trump and everyone who backed him.

Russia's return on its investment really paid off, didn't it? Thanks to the effort they put into helping Trump steal the election from Hillary Clinton, they ended up with quite a foreign policy achievement. America the beautiful looks more like America the soon to be broken up into warring factions.

I'm barely a half an hour away from all of this but it seems like a tremendous distance. I am having trouble sleeping, I have a hard time thinking about what all of this means. Can't it already be over?