There is No Courage in the GOP 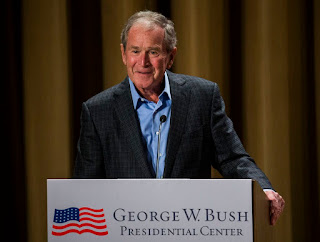 I think we have to stop expecting Republicans to do the right thing:

With less than three weeks until the election, Bush—as the only living former Republican president—would be in a position to stand up for American democracy if Trump loses but refuses to concede, as he has threatened to do.

There is a possibility that Bush's children will persuade him to make a brave, noble stand agains the man who destroyed Jeb Bush's chances of ever being president. I wouldn't bet on it precisely because Trump did the one thing that Bush really wanted, which was to make him the only Bush to serve two terms in office and thereby upstage his father. Bush and Trump have some daddy issues.

A "brave, noble stand" would be to come out and say, "vote for Joe Biden."

Bush is not likely to do that, either. He sees himself as retired—so committed to staying out of politics that he declined to make a cameo in the nonpartisan celebrity voting special that ran on ABC last month. “He’s a man of good manners and strong upbringing,” Marc Racicot, the former governor of Montana, who is an old Bush friend and his first Republican National Committee chair, told me. He posited that Bush’s reluctance to speak out is because “he does not want to make things worse.” Racicot, who, like Bush, didn’t vote for Trump in 2016, decided after watching the first debate that he would be voting for Biden this year.

Bill Kristol, long an unofficial leader of the Never Trump Republicans and now part of the pro-Biden Lincoln Project, told me he finds Bush’s silence “pretty inexplicable,” given the existential moment the country is facing.

“If not now, when?” Kristol said. “If you’re not going to blow the whistle now and say, ‘This is beyond the pale,’ when are you going to do it?”

“I would love it if he would—but no,” Whitman said. “He is just not that way.”

People who know Bush say he reveres the office of the presidency and the post-presidential tradition of avoiding criticizing successors—the modern standard before Bill Clinton and Barack Obama decided to stay active after leaving office. Bush fans want to respect that. They want to encourage it. But they’re running out of patience, and say it’s no longer possible to revere both the presidency and this president. Several Bush alumni, speaking anonymously because they are wary about knocking their former boss, told me that his approach was exemplified by the extended summer vacation he spent at the family compound in Kennebunkport, Maine. He’s done, they said. He’ll check in for short calls and meetings, but much of his attention is on being a grandfather and taking long bike rides, painting, planning an exhibit at the Bush Center on immigrants for the spring.

So, here you have the only living Republican ex-president and what is he?

Of course it's Bush. It's painful to even have to think about him, isn't it? No one has ever been more successful in disgracing himself than this guy.