The Calls Are Coming From Inside the White House 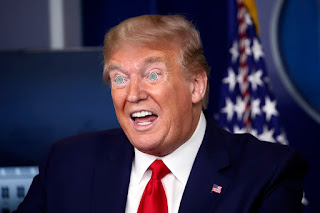 Trump is sick and everyone is lying to cover it up:

President Donald Trump interrupted himself during a call-in interview on Fox News Thursday night to clear his throat to the point of a stifled cough.
Host Sean Hannity did not acknowledge the moment and kept the interview moving.
Hannity did ask Trump how he was doing following his discharge from the hospital with COVID-19, and Trump said he was feeling "really great."
Trump also announced his plans to hold a rally "probably in Florida" on Saturday night and said he will get "the test" for COVID-19 on Friday to see if he's negative.
The president cleared his throat later in the interview when explaining how absentee ballots "are fine."

Trump went on to say many, many crazy things and the media is intent on "cleaning up" his disjointed, disturbing remarks. Future generations will not believe we lived through a time when the President could be an unstable idiot who has embraced full-blown fascism and insanity.
I challenge anyone to listen to this and conclude that the president is in his right mind.
on October 08, 2020