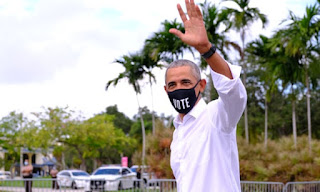 I think the coverage of this year's presidential campaign has been awful for a lot of reasons. One, it is impossible to properly campaign if you're trying to mitigate the impact of a terrible pandemic. Two, the media keeps forgetting that Trump is an impeached president who has killed over 225,000 Americans because of his willful incompetence. They seem to view the COVID-19 response as something "out of his hands" or that it is an "act of God."

President Barack Obama understands this and his presence on the campaign trail is an absolute necessity at this point. The Guardian has better coverage of his impact than you're going to get from The New York Times or pretty much anyone else:

Barack Obama has taken the stage for his drive-in rally in Orlando, Florida, where he is addressing hundreds of Biden supporters as they stand alongside their cars.

“One week Orlando, we’ve got one week -- si se puede -- one week until the most important election of our lifetimes,” Obama told the crowd.

The former president once again sharply criticized his successor over his response to the coronavirus pandemic. Obama noted Trump has complained about how much coverage the pandemic has received, as the death toll continues to climb.

“He’s jealous of COVID’s media coverage,” Obama said. He accused Trump of having “turned the White House into a hot zone” after two coronavirus outbreaks among the president and his senior staff.

“Florida, we can’t afford four more years of this,” Obama said. “We cannot afford this kind of incompetence and disinterest.”

This is a straight up declaration of what President Obama said and it comes without any of the mealy-mouthed qualifications that you get with American media entities. There's none of the bullshit that injects the attitude that President Obama maybe shouldn't criticize his predecessor or the idea that Democrats have failed to lead during the COVID-19 pandemic as well.

It delivers the killer line--Trump is jealous of Covid's media coverage--and this is what makes it devastating.

Case in point, this petty, frivolous piece of floating shit from Glenn Thrush, who can't contain himself in trying to make President Obama no different and no better than the man who rose to prominence promoting racist birther lies:

Former President Barack Obama bounded off the stage in Philadelphia last week after his debut as Joseph R. Biden Jr.’s 2020 battering ram and pronounced himself pumped — and even a bit delighted at the chance to troll his troll, President Trump.

“Oh man, that felt good,” Mr. Obama told a friend in a phone call — and he let Mr. Biden’s staff know that the ungainly format of the event, a “drive-in rally” where he addressed hundreds of supporters in cars in a stadium’s parking lot, had worked surprisingly well, according to several people close to the former president who spoke on the condition of anonymity to discuss private conversations.

In 2016, Mr. Obama took his whacks at Mr. Trump on behalf of Hillary Clinton. Then he stepped up his criticism of his successor during the 2018 midterm elections. This summer, during the virtual Democratic convention, he offered a damning jeremiad against the president, warning that Mr. Trump’s re-election would “tear our democracy down.”

But nothing Mr. Obama has said during the Trump era compares with his gleeful slag-heaping of scorn upon Mr. Trump in the closing days of the 2020 campaign, part of a two-week burst of activity that will culminate in a joint rally with Mr. Biden being planned for this coming weekend, according to Democratic officials.

Fuck you, Glenn Thrush. You're the reason we can't have nice things.
President Obama is doing as much as humanly possible to save our democracy by standing up to Trump and by humiliating him for the horrible things he has done to the American people. This ain't no joking around. This shit is real. This matters. And we need to see what's really going on here. The media wants a horse race between two equal political parties.
This is wrong.
The Democrats are racing to save the idea of America and the Republicans are getting ready to steal the election and extract revenge upon every single person who has opposed their fascist grab for power.