This is How the Sausage Gets Made 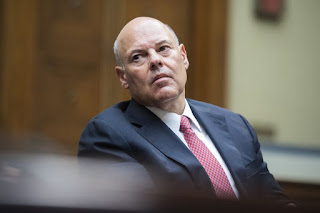 Postmaster General Louis DeJoy is up to his neck in criminal mischief:

Postmaster General Louis DeJoy told a judge the U.S. Postal Service can’t reassemble the hundreds of high speed mail-sorting machines that were taken apart this year, a project that more than a dozen states allege was intended to undermine the upcoming election.

A nationwide injunction issued last week in Yakima, Washington, should be amended to acknowledge that the machines can’t be put back together, DeJoy and the USPS said in a filing in the case on Wednesday. The machines, dismantled under a DeJoy initiative, were stripped for parts to improve or repair other machines, they said.

“It is therefore not possible to return such machines to service,” the USPS and DeJoy, a major Republican donor, said in the filing.

The Sept. 17 injunction granted by U.S. District Judge Stanley A. Bastian, requires the USPS to reverse disruptive operational changes implemented by DeJoy, including restrictions on overtime and changes to the handling of election mail, such as absentee ballots applications. The order was sought by a group of Democratic state attorneys general who have sued the postal service.

DeJoy is a wealthy man. Surely he can afford to sell some of his stocks and sell off some of his assets to replace and restore the mail sorting equipment that was destroyed because he wants to ensure Trump gets re-elected? Seems to me that the first thing a new administration is going to have to do is deal with the second tier criminality of all the Trump appointees after it deals with the first tier criminality of Trump and his family members.

The third tier will be when we get to the Stephen Millers of the world who should be handed over to The Hague and charged with crimes against humanity.

I mean, there's so much criminal activity out there. Can we ever really be sure that we know about all of it? What about everything we're going to spend the next twenty years discovering? Watching DeJoy make the sausage like this is wearing me out. First he takes a fully functional Federal agency that the American people love and depend upon. Then he evaluates how to destroy it. And, finally, he just does it and makes everything permanent! Suck it, libs. You can always spend money we no longer have to rebuild it next year! But, remember. You can't raise taxes on shit birds like DeJoy in order to pay for it.

Truly, it boggles the mind to consider the criminal behavior of the one-term Trump Regime.