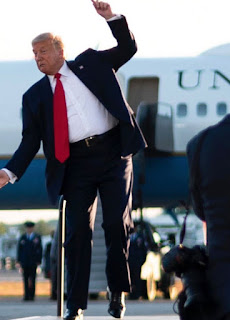 You're just going to have to get used to the idea that 42% of the American people are going to look at Trump and see someone "strong" and "presidential." He is none of those things. He is a broken, crazy fool and he's killing Americans every day with his incompetence. He's a stumblebum and he will never be "presidential."

The debates won't change anything. They give the media something to do and they allow for the possibility that there will be some sort of horserace.

There is no horserace. There is just this country's descent into Trumpism. We need to fight harder and fight back and make sure this never happens to us again.