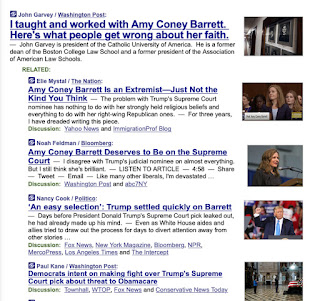 There are a number of reasons to oppose Amy Coney Barrett but the simplest reason is right in front of everyone's faces.

She holds extreme views that are out of the mainstream of legal thought.

She will vote to make abortion illegal.

She will side with large corporations against all others.

This is all based on her actual record as a judge. This is not my opinion. She's so extreme, the right wing is practically having a public orgasm over her being chosen. That, in and of itself, should disqualify her from being on the court but it won't.

Oh, and the media is too stupid to explain why she's so extreme. They'll frame it in simple terms. "How could this attractive young woman have views far to the right of Antonin Scalia? It's unheard of. Besides, she has a wonderful smile and Democrats are just stupid."

She's too extreme for the court that she's already on! And now they want to elevate her to the Supreme Court where she will sit for forty years and vote without reservation for a view of America that is so far to the right, John Birch would blush.

This is where we're at because some squishy people couldn't bring themselves to vote for Hillary.

You get the country you deserve when you don't vote or if you don't vote for reasonable people. The end result is going to hurt an untold number of people and drive more and more Americans into poverty and ruin.