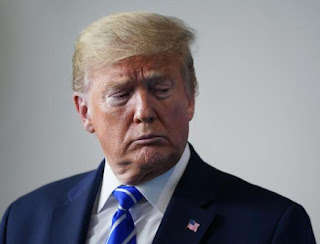 Donald Trump paid no federal income taxes whatsoever in 10 out of 15 years beginning in 2000 because he reported losing significantly more than he made, according to an explosive report released Sunday by the New York Times.
In both the year he won the presidency and his first year in the White House, Trump paid just $750 in federal income taxes, the Times reported.
Detailing payments gleaned from more than two decades of tax information, the Times report outlines extensive financial losses and years of tax avoidance that deal a blow to the business-tycoon brand Trump has built his political career on.
At a White House briefing Sunday, Trump denied the New York Times story and claimed that he pays "a lot" in federal income taxes.

I mean, what the fuckity fuck?

The Times reported Sunday that Trump's tax information reveals specific examples of the potential conflicts of interests between the President's business with his position.
The President has collected an additional $5 million a year at Mar-a-Lago since 2015 from new members. A roofing material manufacturer GAF spent at least $1.5 million in 2018 at Trump's Doral golf course near Miami while its industry was lobbying the government to roll back federal regulations, according to the Times.
It also found that Billy Graham Evangelistic Association paid more than $397,000 to Trump's Washington, DC, hotel in 2017.
The newspaper reported that in Trump's first two years in office, he has collected $73 million in revenue overseas, with much of that coming from his golf courses but some coming from licensing deals in countries, including the Philippines, India and Turkey.