Republicans Love to Help the Russians 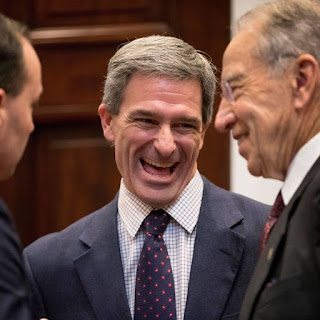 Ken Cuccinelli couldn't get elected dog catcher so he ended up working for Trump in the Department of Homeland Security. Instead of functioning more or less like a normal American official in the Federal government, our man Cuccinelli decided to act like a clown and help our adversaries:

A whistleblower is alleging that top political appointees in the Department of Homeland Security repeatedly instructed career officials to modify intelligence assessments to suit President Donald Trump's agenda by downplaying Russia's efforts to interfere in the US and the threat posed by White supremacists, according to documents reviewed by CNN and a source familiar with the situation.

The whistleblower claims that acting DHS Secretary Chad Wolf instructed DHS officials earlier this year to "cease providing intelligence assessments on the threat of Russian interference" and, instead, focus their efforts on gathering information related to activities being carried out by China and Iran.

Trump and several of his top national security advisers have repeatedly sought to emphasize the threat posed by China in recent months while downplaying the intelligence community's warnings related to Russian interference in the 2020 election.

DHS did not immediately respond to CNN's request for comment regarding allegations that Wolf and Senior Official Performing the Duties of the Deputy Secretary Ken Cuccinelli ordered officials to change intelligence assessments for political reasons but have broadly denied either man took actions that constitute as an abuse of power, as stated in the complaint.

So, if you "modify" the intelligence assessments in a way that redirects America's understanding of what our adversaries are trying to do to us in order to make it so that the current president can avoid taking action against Russia, you're not loyal to this country. You are helping our adversaries and hurting our efforts to defend ourselves.
Is there just one person working for Trump who believes in the idea of America? Is there just one person who can do the right thing once in a goddamned while?
Apparently not. What a bunch of idiots.