Mike Pompeo Wants the White People to Know He Loves Them 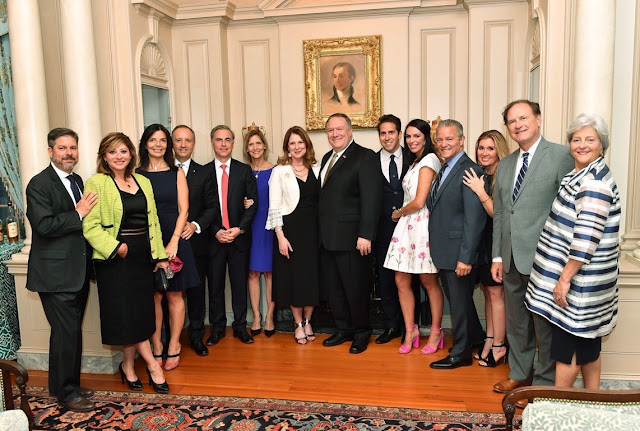 I find it hard to believe that Trump would tolerate what Mike Pompeo is doing right out in the open like this:


Secretary of State Mike Pompeo is quietly relaunching his extravagant, taxpayer-funded "Madison Dinners" during the coronavirus pandemic, even as Congress scrutinizes his use of government resources to entertain CEOs, big-dollar Republican donors and television anchors.

Pompeo's Madison Dinners, which an NBC News investigationrevealed in May, had been on pause since March, when the country shut down because of the coronavirus. But now they're back, with a dinner scheduled for Monday and at least three others on the calendar in September and October, two U.S. officials said.

I mean, if Trump loses in November, the mad scramble to round up all the goobers and create a new coalition of freaks, racists, QAnon believers, and bellowing crazies is going to have to start sooner rather than later. You have to organize the nut jobs in such a way as to separate them from their money when they're good and angry about being told they have health care and clean drinking water, you see.

Pompeo knows that he will barely have a shot at getting out ahead of Ivanka Trump and the withering, manly stare of War Hero Mike Pence before Marco Rubio and Tom Cotton swoop in ahead of Nikki Haley to seize the RNC donor lists that Ronna Romney is hiding in her bra. What better way to do this than to reassure a bunch of white people that he's white like them and that he believes in the white supremacy that these white assholes believe in with all of their whiteness?

I mean, honestly. Does anyone really think that the people gathered above are there for the witty conversation? This is about the soul of white America and they're looking for a hero. Instead, they get Pompeo and whatever cheap catered food he can shove in their face. It's not looking too good for him, but who gives a shit, right?