Medford, Oregon is on Fire 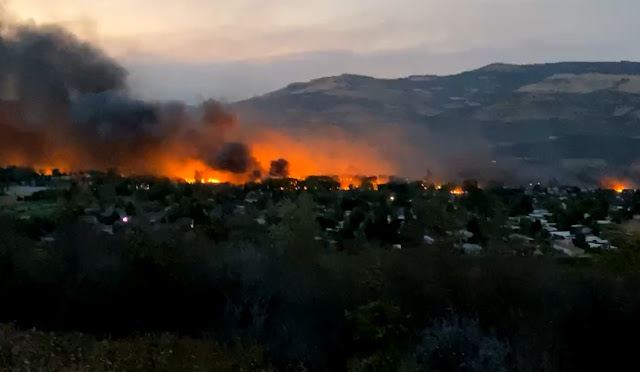 Tonight, an American city of over 80,000 people is burning.


As fire ravages the cities of Phoenix and Talent, a new blaze started in north Medford.
The fire was first reported at about 8:00 p.m. Tuesday. Radio traffic indicated it was at or close to the Bear Creek Greenway near Interstate 5 exit 30.

As of 9:00 p.m., I-5 remained closed in the area as limited resources attacked the fire. Evacuations were being considered as far north as Central Point due to the spread of the fire.

This comes as a fire that started in north Ashland Tuesday burned north through Talent and Phoenix, triggering evacuation notices for the City of Medford.

Not the woods, not the brush in the hills--the city is beginning to burn. The fire has swept down into the city and is burning structures. Evacuations are being carried out.

This map says it all: 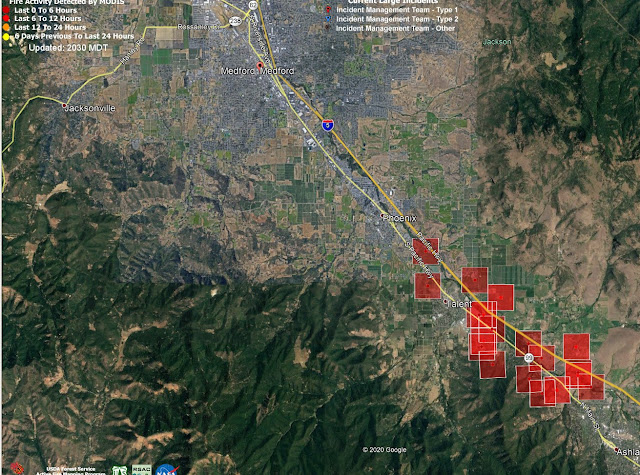 While we carry on with all of our problems and live with our cares and concerns, there's a fire headed straight up Interstate 5 and it's headed for the city itself.

Say a prayer tonight (or pray to whatever deity you follow or believe in) and think good thoughts for the people in the way of what's happening. Whether you've been following the folks facing devastation in Louisiana and Texas or the people in eastern Iowa who are still dealing with the after effects of a devastating derecho, it is hard to see how it is possible to escape being on edge about what is happening to the world around us.  Add to that COVID-19, economic calamity, 50,000,000 Americans facing hunger and everything else I haven't mentioned, and it is just staggering how much suffering there is out there right now.

I am hoping we get to a better version of America soon and go back to taking care of one another because this year is the annus horriblus of nightmares.
on September 09, 2020