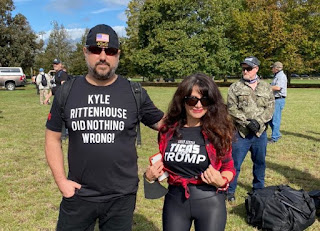 Andrew Kimmel is covering today's white nationalism rally in Portland, Oregon. The Proud Boys have come from all over to carry out acts of provocative violence against American citizens who are exercising their right to protest.

In about a year's time, when there is a Democrat in the White House, these same people will be exercising their own right to protest against anyone who they deem a threat to their belief in white supremacy. Instead of carrying out acts of violence against protesters, they'll probably be shaking hands with the cops and damaging or seizing Federal property.

How did we get to this point in American history? Look no further than the seizure and occupation of the Malheur National Wildlife Refuge in, where else, Oregon.

When anti-government wingnuts and white supremacists are allowed to get away with criminal activity, they tend to continue with that criminal activity in order to draw attention and donations to their cause. These are people who literally can't hold down a steady, normal job anymore because they are too well known in their communities as racists and fuckheads. And so, white supremacy becomes their full-time occupation.

This is all paid for by the Republicans who tolerate and encourage this activity. Without it, they couldn't steal any elections.