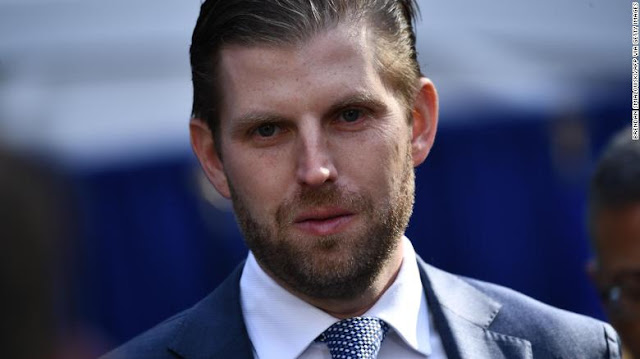 You peasants are lucky that the Trump family even lets you live in their country:

Eric Trump is willing to be interviewed by the New York State Attorney General's Officefor its investigation into the Trump Organization after the presidential election, according to a new court filing.
"(I)n recent correspondence, counsel for Mr. Trump have made clear that he is willing to appear pursuant to the subpoena and have also proposed four available dates after the Presidential election on November 3, 2020," lawyers for the Trump Organization wrote in a court filing Thursday.
"(C)ounsel for Mr. Trump proposed multiple dates beginning shortly after the election -- just two weeks later on November 19 -- because of Mr. Trump's extreme travel schedule and related unavailability between now and the election, and to avoid the use of his deposition attendance for political purposes," the attorneys added.
Last month, New York state Attorney General Letitia James' office asked a judge to enforce subpoenas for Eric Trump's testimony and documents as part of its investigation into whether the Trump Organization improperly inflated the value of certain assets. The office said Trump, who is executive vice president of the Trump Organization, initially agreed to be interviewed for the civil investigation in July but then abruptly canceled, "balking less than two days before he was scheduled by agreement to give testimony."

In the world in which the Republican Party lives, you can not and you will not question THE LEADER or HIS FAMILY and you will BOW DOWN to the power they have seized OR ELSE. Nice work if you can get it. This is not the sort of due process anyone else is granted when accused of defrauding the taxpayers and committing insurance fraud.
Everywhere you go, Democrats are operating under the assumption that they have to treat the Trumps fairly and with a level of respect they have not earned by paying any taxes. These are criminals and cheats, people so fucking crooked that they cannot even run a charity anymore. These are people who have stolen donations for kids with cancer and have looted the country. They should be treated like criminals who are innocent until proven guilty and afforded the due process that they deny to others. Watching the Trumps game the legal system with delays and filings and appeals and objections is like watching an adult take candy from a baby.
on September 17, 2020