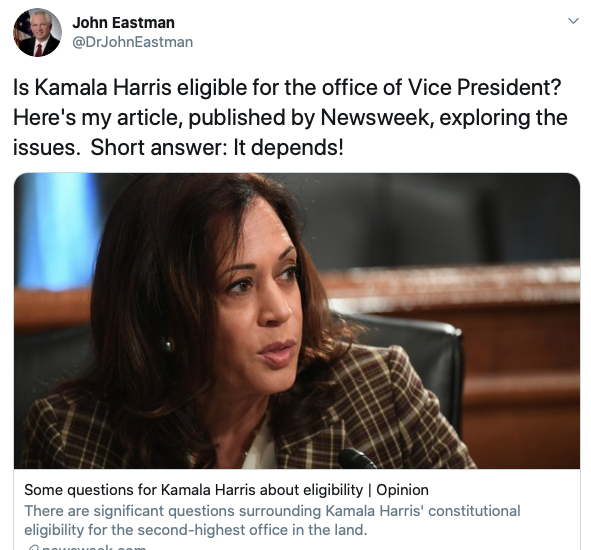 If you were waiting around to see what the right-wing media complex would coalesce around in terms of opposing Senator Kamala Harris, look no further:


Interestingly, this recitation of the original meaning of the 14th Amendment Citizenship Clause might also call into question Harris' eligibility for her current position as a United States senator. Article I, Section 3 of the Constitution specifies that to be eligible for the office of senator, one must have been "nine Years a Citizen of the United States." If Harris was not a citizen at birth, we would need to know when (if ever) she became a citizen. Her father's biographical page at Stanford University identifies his citizenship status as follows: "Jamaica (by birth); U.S. (by naturalization)." But there is some dispute over whether he was in fact ever naturalized, and it is also unclear whether Harris' mother ever became a naturalized citizen. If neither was ever naturalized, or at least not naturalized before Harris' 16th birthday (which would have allowed her to obtain citizenship derived from their naturalization under the immigration law, at the time), then she would have had to become naturalized herself in order to be a citizen. That does not appear to have ever happened, yet without it, she could not have been "nine Years a Citizen of the United States" before her election to the U.S. Senate.

This is all racist, bigoted nonsense. John Eastman is using the faded legitimacy of Newsweek to air out nonsensical legal arguments against Harris as a way of launching a million Republican birther fantasies.

His reading of the law is a fever dream:


Harris is a citizen of the United States and has been since birth.

She was born in Oakland, California, on Oct. 20, 1964, according to Encyclopedia Britannica. Her parents were both immigrants — her father from Jamaica and her mother from India.

By virtue of her birth in California, Harris is a natural-born U.S. citizen.
The Citizenship Clause of the 14th Amendment provides that "all persons born or naturalized in the United States and subject to the jurisdiction thereof, are citizens of the United States and of the State wherein they reside."

And that's not dependent on their parents' citizenship. "Anyone born on U.S. soil and subject to its jurisdiction is a natural born citizen, regardless of parental citizenship," according to the Cornell Legal Information Institute.

Parental citizenship is relevant to an individual's citizenship status only if the individual is born outside of the United States.

In other words, Eastman knows he's wrong but he doesn't care. What a fumbledick.

And, due to the fact that people like Chris Cillizza, et al, remain in positions of influence at large media organizations (and thus, know nothing), we are about to be subjected to months of this garbage. We will see variations on this theme from here on in because, no matter how many times you discredit these people, they keep finding a way to ooze out from under the rug and look for useful idiots in the media to amplify their message of hate and intolerance.

You're telling me that Kamala isn't an American and probably isn't even legally a United States Senator? And this is the guy picked to deliver that message? Expert takedown by the great James Fallows here:

An early “birther” critique on Kamala Harris, by a guy who lost badly in race she won for Calif AG.

(He lost the GOP primary in 2010 by 13 points, to the person who then lost narrowly to KH in the general election. In the essay, he does not mention that he lost that race.) https://t.co/jeTTgVHAYU


What a bunch of horseshit. Thanks to Trump, this is what people like Eastman are going to get away with from now on any time a person of color appears on a national ticket.

The 14th Amendment is a relic of an outdated time. You can be born somewhere else, come to America, end of loving this country and what it represents when it is run the right way, and you should be eligible to run for president. There is nothing more American than that.

This latest trial balloon is going to be recycled through numerous outlets and it will be swatted down, you can bet on it. That's because racist attacks on a person's legitimacy and right to hold office is a thing you can pull from the standard Republican playbook. Anyone who isn't white is not a citizen, and they will beat that fucking drum until they can't beat it anymore.

What a disgrace these people are to the idea of democracy and decency.