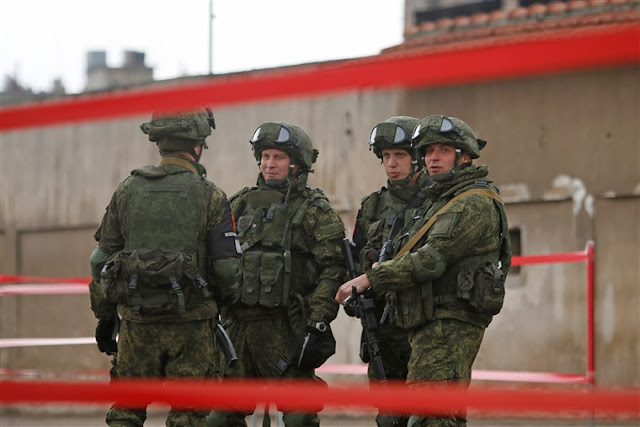 Russian troops in Syria are apparently trying to kill Americans and collect bounties:


U.S. service members were injured after an altercation with Russian forces in northeast Syria this week, according to a draft military statement and a person familiar with the matter.

Four troops have been diagnosed with mild concussion-like symptoms after the incident, according to draft Pentagon statement reviewed by POLITICO. A second U.S. source briefed on the matter confirmed that multiple U.S. troops were injured.

Videos of the encounter that emerged on Twitter on Wednesday appeared to show a Russian vehicle ramming an American vehicle, and a Russian helicopter flying low over U.S. forces.

Pentagon spokespeople declined to comment or confirm the videos.

The U.S. has roughly 500 troops in Syria, primarily in the northeastern part of the country. The American troops are fighting alongside the Syrian Democratic Forces to destroy the remnants of the Islamic State militant group.

I would not believe ANYTHING in this statement. I wouldn't believe that the number of Americans injured is only four and I would tend to believe that this is a heavily sanitized version of events until it is confirmed and proven and then confirmed again. The political pressure that is being directed at maintaining "friendly" and "compliant" relations is enormous given the very evident fact that Trump is a Russian asset.

This is being timed to further destabilize American politics and throw more chaos and confusion into our foreign policy. The Russians know that, if Trump is removed from office, the Department of Defense under a Biden Administration will be much more difficult to push around.

There is no mistaking the fact that an American Mine-Resistant Ambush Protected (MRAP) vehicle was deliberately rammed by Russian troops in the field.


#BREAKING: US service members were injured after an altercation with Russian forces in northeast Syria this week: 4 US troops have been diagnosed with mild concussion-like symptoms pic.twitter.com/s7qY1lQuKV
— Biden Army (@Biden_Army) August 26, 2020

After reviewing the video, you can clearly see that the Russians are not interested in working with us nor are they capable of being any kind of coalition partner when it comes to operating in Syria or anywhere else. Putin's troops are so poorly led and trained that it is a wonder no one was killed. This is similar to how their aircraft "buzz" ours and engage in aggressive activity in order to intimidate our pilots and air crews.

Here is another video:

Another video presumably from that same August 24 patrol with Russian Typhoon-K, Ural-4320, and Tigr vehicles. Interestingly, it appears they brought the Mi-8AMTSh helicopter to hover just above a group of people to disperse them. 317/https://t.co/28oDhSpjZw pic.twitter.com/d4uJ8jB8yn
— Rob Lee (@RALee85) August 26, 2020

Nothing is preventing the Russians from killing our troops. A normal, functioning Pentagon led by actual professionals and capable political appointees would have already separated our operations from those of the Russians or would have taken the necessary steps to withdraw our troops from that part of Syria. There is no reason for us to be there, carrying out operations with the Russians in proximity to our troops, if they are going to be aggressive and reckless.

We should take steps to protect ourselves from any Russian forces that come into contact with U.S. or NATO forces. They are not our friends or partners. They are rivals and adversaries.
on August 26, 2020