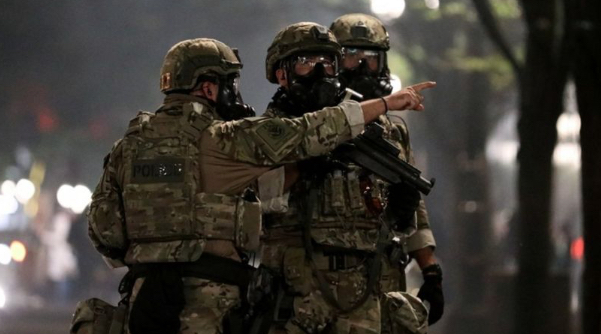 By now, we should all recognize the pattern in what Trump does.

Is there a serious, complicated problem facing the American people? If so, attack it with an army of incompetent, poorly-trained men rendered anonymous by masks and body armor. Strip them of identifying information, turn them loose with as much weaponry as they can get away with using, and don't forget to randomly punch some hippies along the way.

The bad old days are here and this is what they look like:

Mr Trump on Monday criticised a number of cities run by "liberal Democrats", including Chicago and New York, saying their leaders were afraid to act.

He said officers sent to Oregon had done a "fantastic job" restoring order amid days of protests in Portland.

Democrats accuse Mr Trump of trying to rally his Conservative base.

President Trump, a Republican, has been trailing in opinion polls behind his Democratic rival, Joe Biden, ahead of November's election.

Last month, Mr Trump declared himself the "president of law and order" in the wake of widespread protests over the death in police custody of African-American man George Floyd...

Now that no one is safe from the up-armored onslaught of Trump's personal security forces, I would like to welcome you, officially, to banana republic status. Your job is gone, your body and your home belong to the dictator, and there is no longer a right to free assembly. All of this brought to you by a group of feckless GOP senators who had the chance to do the right thing and said nah, fuck it. If this is allowed to stand, who knows if there will be an election this fall. Someone better do something, and they better do it fast.

As America's badly instructed media complex wakes up to the fact that, yep, Trump is a racist and a fascist and he will ruin everyone and every single American institution to keep himself out of prison, there are a handful of brave people out there resisting what is going on. Decent people everywhere with the means to do so might find themselves having to relocate to a state run by sane adults, and fast. An apathetic country slowly realizes that it must vote these clowns out of office and let a Democrat fix everything for the third time in my lifetime. I'd like to know how this ends because, dammit, moving is expensive.