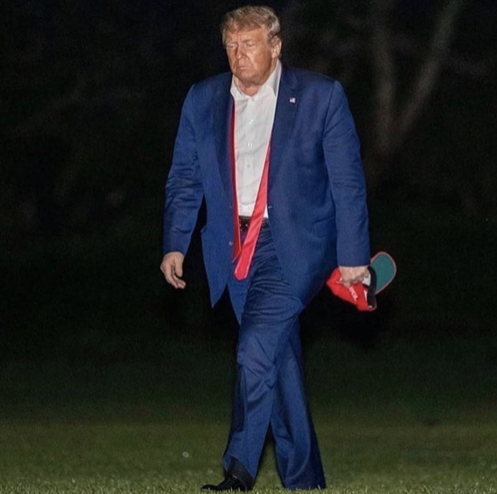 Unpopular area man still believes he has a chance at getting re-elected:


President Trump’s approval rating has sunk to 38 percent, according to Gallup’s latest poll, with significant drops even recorded among his most loyal support base: old white men. After reaching a personal Gallup best of 49 percent in May, Trump’s approval rating slid in June and is now 3 percentage points above his all-time low of 35 percent in 2017. Trump’s popularity fell sharply among all demographic groups: Midwesterners, women, white college grads, and more. He fell below majority approval among white Americans, men, older Americans, Southerners, and those without a college degree. Fifty-seven percent of white Americans without a college degree surveyed approved of his performance, a drop from 66 percent recorded from January to May.

The only silver lining: His popularity among Republicans rose from 85 percent to 91 percent. Approval among Democrats sank from 5 to 2 percent, creating the largest partisan gap ever recorded in a Gallup presidential approval poll.

The only path forward for Trump is lawlessness, martial law, and voter suppression. There is no scenario where an incumbent president this unpopular and this bad at his job survives the judgment of the American voter.

I know we like to think in terms of a worst-case scenario, but there is no legitimate way Trump survives the 2020 Election and gets re-elected. The cake, as they say, is baked. The voters now see him as the incumbent rather than a "fresh face" on the political scene. Joe Biden has none of Hillary Clinton's baggage and the voters are probably ready for a return to eight years of Obama-era politics.

The deal is done in terms of motivating people to throw Trump out on his sorry ass. All Biden has to do is stack the Democratic National Committee with election law lawyers who are ready to fight for every state. I hope that's what they're doing and I hope they are ready for the mother of all court battles. They have to already have a strategy to fight the Justice Department and the state election officials where Republicans are in control. Failure to do this is political malpractice.

Come on, man. There is no plan for a second term. If Trump is able to destroy our democracy and hold onto power, the only "plan" is for more stealing.
on July 06, 2020