Golfing During a Pandemic 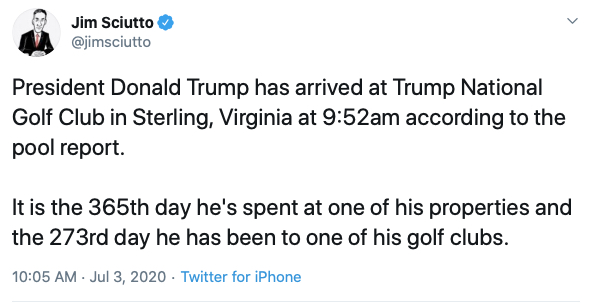 Back when there was such a thing as political accountability, this would be a career-ending decision. In the Trump era, it's just a Friday, man.

This is just not the sort of thing we should just "get used to" in terms of commenting on what Trump does and how he spends his time. This is a post that I probably could have written one, two, or three years ago simply because America has a lot of problems. And I would probably have to admit that any president who goes golfing does so at the expense of being focused on the job at hand.

The difference here is that all of our previous presidents didn't spend every working day with a "light" schedule of "Executive Time" and none of them showed up for work at noon, rage tweeted fifty times, and went back upstairs at the White House before the end of the normal working day. You can complain about President Obama golfing all you want, but you'd be wrong. By any measure of effectiveness, he worked harder than most presidents and was available to the press as well as available to the national security apparatus.

If you want to attack America, wait til Trump is golfing. You'll have at least a three hour head start.

No one holds Trump accountable for any of the norms he is breaking except those of us who oppose him. There is no fear from the Senate GOP nor is there any chance the judiciary is suddenly going to grow a pair. We are stuck with a useless, listless president until we can throw his sorry ass out of office.

But you can be well assured of the coming hypocrisy. As soon as the next Democrat is in office, the Republicans will bitch and complain about their down time and their leisure activities.
on July 03, 2020