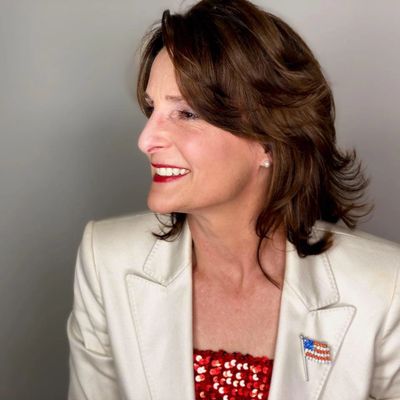 Dianna Ploss is a bag of nuts:


A New Hampshire radio station cut ties with a conservative host after she filmed herself verbally attacking landscapers who were speaking Spanish.

Dianna Ploss, who hosted the Dianna Ploss Show on WSMN 1590, livestreamed a video of herself on Facebook as she confronted a group of workers and asked if any were undocumented immigrants.

"It's America. You should be speaking English," she says in the video while recording the workers on the job. "Is anybody here illegal? Are these guys illegal?"

Later in the video when a man who witnessed her rant questioned why she was "harassing" the workers, Ploss turns to the camera, and says, "He's a Black man and he's going to protect the brown man from this White woman whose practicing White privilege because she happened to walk by and heard this guy talking to all of these guys doing this work in Spanish."

The video has since been removed, but clips of it have resurfaced elsewhere on the internet.

WSMN 1590, based in Nashua, said on Sunday that Ploss is "no longer associated or affiliated in any way with WSMN or Bartis-Russell Broadcasting, LLC."

"We at WSMN value freedom of speech, freedom of expression and assembly. We will not tolerate discrimination, racism or hatred," the radio station said in a statement. "We continue to present and offer on air opportunities for discussion, education and the exchange of opinions and ideas."

Yet another Trump supporter pivots to institutional racism and gets fired. How many times do we have to tell this story? How many others are out there, waiting for their martyrdom moment?

It is disingenuous to think that this just happened all at once. The folks at WSMN were all too happy to employ Ploss for as long as they did and they were well aware of the fact that she's an active member of the conspiracy theory crowd:


A "Liberate Massachusetts" rally in front of Gov. Charlie Baker's [a Republican, nonetheless] house Thursday seemed to draw more reporters, law enforcement and supporters of the governor than protesters.

The event, organized in part by self-described "MAGA Activist" Dianna Ploss of Gloucester, was for those who are upset about Baker's closure of nonessential businesses to halt the spread of coronavirus.

More than a dozen people, most of them not wearing facial coverings or masks, showed up around 10 a.m. to the front of Baker's house on Monument Avenue to protest what they view as an unjust lockdown of the economy.

There were so few liberators when the rally started that a scrum of reporters and photographers totally surrounded Ploss and a few others holding court in the middle of a crosswalk on Monument Avenue.

Around 11 a.m., a honking line of cars sporting American flags and 'Trump 2020' banners rolled by Baker's house. It was led by a red dump truck festooned with flags, emblazoned with Trump signs and slogans such as "All Lives Matter." The driver announced over a loudspeaker: "Wake up, Charlie Baker, wake up!"

Baker was nowhere to be seen.

"I'm here because we want to reopen the state," said Ploss, an avid supporter of the president's and who has a radio show on a Nashua AM radio station. "People are suffering and we have liquor stores that are open but churches are closed, right?

I hear Sinclair is hiring.