Another Hoax is Proven to be True 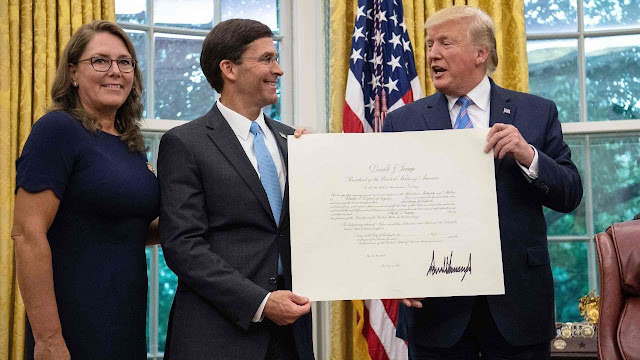 Trump says that Russian financial support for the Taliban is a hoax. In and of itself, that should have been the moment where Mike Pence becomes president until next January. I mean, wow. That scandal still resonates, no matter how hard the media tries to ignore it happened.

So, when you're nobody's idea of a real Secretary of Defense, you end up saying things like this in public.


Secretary of Defense Mark Esper confirmed Thursday that he had been briefed on information regarding Russian payments to the Taliban, seemingly acknowledging that Russia's support for the militant group in Afghanistan is not a "hoax," as President Donald Trump has claimed. However, Esper also made clear that he has not seen intelligence that corroborates claims that American troops were killed as a result of the "bounty" payments, walking a delicate line between acknowledging a well-known threat and potentially clashing with the President.

Esper's comments came during a long-awaited appearance before the House Armed Services Committee, where lawmakers had their first opportunity to ask the defense secretary and Chairman of the Joint Chiefs of Staff Gen. Mark Milley about their knowledge of intelligence on Russia offering bounties to the Taliban for killing US troops in Afghanistan.

It was clear that both men attempted to carefully navigate questions from lawmakers, but Esper admitted exercising particular caution while addressing inquiries about whether he had been briefed on the matter and when.

Responding to a very narrow line of questioning from Rep. Mike Turner, an Ohio Republican, Esper initially told lawmakers that he did not recall a briefing that included the word "bounty," but less than an hour later he clarified that answer when pressed by a Democratic member of the panel.

I think we're well past the point where Esper and Milley should resign. They've made fools of themselves by allowing members of the military to be used to terrorize Americans exercising their right to protest.  We're in that grey area where it just doesn't matter what they say or what the testify to because no sane person is going to either of them to do anything other than shine golf balls and fetch coats and gloves ever again. Esper pretending to make this about whether the word "bounty" was used is shameful.

In January, when Trump is, God willing, forced to leave office, the next president should immediately fire every Trump appointed official in existence. And then the generals and admirals must be removed as well. Milley should not be allowed to stay in his job because, well, one word. Bayonets.

The Russians were paying bounties on American service members. Trump probably didn't even know about it because he has a fetish for making sure Putin is happy with him. Esper and Milley should have told the so-called Gang of Eight and they should have made us aware of it. They didn't, and they've been covering it up, and it's an absolute disgrace, top to bottom.