A Lesson in Civility 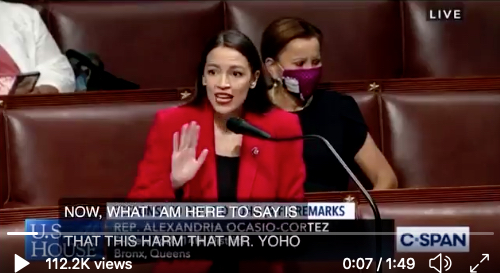 You can follow this link to a clip of Representative Alexandria Ocasio-Cortez speaking on the floor of the House and, by the end of the day, there will be more such clips. But let's unpack what is happening here by making this entirely about me.

One of the reasons why I delight in being a failed blogger with a small audience of wonderful people is because I did not take the crazy pills a decade ago and become some sort of ridiculous caricature of a controversial person. I've been wrong numerous times, and lazy, and indifferent, but I've not lost my mind since the early years of the Obama Administration.

Back then, I was concerned because of fucking Rahm Emanuel and his desire to do anything except reform health care and I briefly lost my way. This did not lead to a wholesale condemnation of what the Democrats were trying to do, but I was definitely on the side that saw that getting rid of Governor Howard Dean was a huge mistake and that we needed to build up the infrastructure of the party. I believe I was proven somewhat right, but that's neither here nor there.

I did not turn into a screaming idiot who shitposts about politics. I prefer to do that for music I don't like. I did not adopt the persona of the purity troll who writes long screeds about fake controversies. For that, I am proud.

No, what's incredible about this moment is that a woman of color is tearing the goddamned hide off of a white man in public and he deserves it. He deserves it because he was a complete and utter jackass and called her "a fucking bitch." This is a long overdue conversation about sexism, misogyny, power, and respect for women. Full stop.

There will be no moment of "learning" here. Representative Ted Yoho is insane. But it's interesting to watch someone demonstrate in real time the need for fundamental change in America.

This is not the sort of discourse we need to have in this country. We need to be civil, but only so far as our civility gets something done. There's no point in being civil if you're going to tell lies, cheat, steal, and leave the country bankrupt. Now we're into criminal matters.

I really think the power of what Ocasio-Cortez is saying is going to go over the heads of most people. It is an exposure of the power structure of America. White men, like myself, have gotten away with calling women "fucking bitches" in public for far too long. And that extends beyond the language into actual things that white men get away with--being sexist, being crude, being engaged in the creation of policies that marginalize others, and so on. This power structure is collapsing because the ultimate white male archetype is a mediocre man with no functioning capability or intellect who is literally bragging about not being a sufferer of dementia.

This is the language of adult responsibility. You're shocked by it because there have been few, if any examples of it being demonstrated in public. President Obama spoke this way all of the time and pundits referred to him as a "dick" when he did it. Mark Halperin called him a dick on television for acting like an adult. That's where we are.

It is not "cancel culture" and it is not "identity politics."

This is entirely about being a decent person who engages in civil discourse. This is not about victimization. Ocasio-Cortez is a woman explaining to men that the time for this behavior is over.

It's straight up accountability.

And it is a ludicrous time to be an American when you have to point something like this out. But what Ocasio-Cortez is showing us is that there is hope for the future of the country if we can just get rid of these awful assholes and start acting like adults.

The cynic in me believes they'll find a way to hold on to their power because that's the only skill they really possess at the level of Ted Yoho and Donald Trump--manipulating the media in order to live to fight another day. Any reasonable person would be forced to resign or would have been thrown out of office. But no, here we are. Up to our armpits in a mediocrity that is killing thousands of people and it isn't even hyperbole anymore. People are dying because of the lack of accountability and competence. It's incredible to think of where we would be with just a sliver of competence right now.
on July 23, 2020